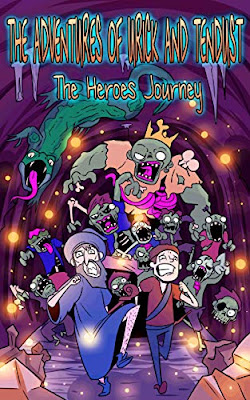 “A sociopathic super wizard joins the Wizards guild. A guild where heroes are made and commercialized. When things don’t go according to plan, he decides to improvise. A not-so-bright young and inexperienced wizard joins him along the way.”

“In 2018 John, after a lot of thinking, finally decided he was going to become an author. In 2020, still working on his big epic, he decided to let a short story, which he had written in the meantime, be his first published book.”

In The Heroes Journey we follow Wizard Urick as he tries to turn Frank Fury into a Hero. Simply because Frank has a heroic sounding name. Urick’s means are unconventional, to say the least. Tendust is a young wizard who recognizes Urick and wants to become his apprentice so he regales Urick with false accomplishments. Urick knows Tendust is on to him so he tries to shake him off, but that’s not going to happen. Tendust sees Urick as a meal ticket. It’s an enjoyable ride as Urick tries to make his lies sound like the truth, as he leads his small troupe of unskilled warriors to destroy Tyson the Zombie King.

The Heroes Journey is an imaginative and fun romp as Urick defies the rules to turn Frank into his first Hero. The dialogue and inner thoughts of Urick are highly entertaining. If you want to know how real heroes are made this is the story for you. Hahaha. However, it will make you think about how much praise can actually affect change in a person’s life.

The Heroes Journey is book 1 in Mr. Amlien’s, The Adventures of Urick and Tendust Series. Even though the book cover may attract younger readers, be warned there is a lot of colorful adult language.