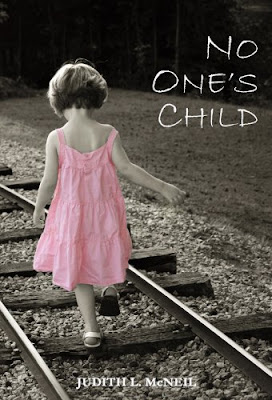 This memoir, set in Queensland, Australia, begins in January 1948 when the author was five years old and ends nine years later as fourteen-year-old Judith awaits a train to Brisbane with her family. To reveal the reasons for her being at that railway station, or to explain with whom she waited for the train would be an unforgivable spoiler. For the first time, but not the last in this review, I recommend you read No One’s Child and find out for yourself. You won’t regret it.

There’s not much in the way of publicity for this author. She wrote her life story in two books: No One’s Child and The Girl With The Cardboard Port. Her bio on Amazon offers this: Judith L. McNeil lives in Queensland, Australia. She is now retired after decades spent working as a caregiver for the aged, but volunteering in the community is still very much a part of her life. Her interests other than writing are breeding Shitzus, landscape painting, and reading.

Like all the “Pals”, I’m no learned literary expert, and normally that causes me no qualm. I select Indie stories from BigAl’s list as they catch my eye, read them, and give an honest opinion — my opinion. Maybe something of what I say about a work will appeal and make you think, “Yes, that sounds like an interesting read.” Or maybe my take will be sufficient to convince you that the piece isn’t for you, and you’ll move on to the next story — there are many from which to choose.

I confess to feeling inadequately equipped to give this story its due. But here goes. As Forrest Gump said when he sat on that park bench waiting for the bus he didn’t need to catch, “Mama always said life was like a box of chocolates. You never know what you're gonna get.”

And, for me, reading No One’s Child, selected by chance from Al’s list of 1500+ waiting works, was an extraordinary experience. I cannot express how happy I am that I didn’t pass it by.

In 1996, Frank McCourt’s memoir, Angela’s Ashes, became a worldwide best-seller and went on to win the Pulitzer for Autobiography. That story has many correlations with Judith McNeil’s memoir. In fact I can cut this review short for you: if you enjoyed Angela’s Ashes, you’ll enjoy No One’s Child. Mr. McCourt was raised in Limerick, Ireland, but the poverty and hardships endured and, more to the point, accepted as ‘just how it is’ by Frank and Judith (Judy) have a commonality that transcends the geographical separation of Ireland and Australia.

The staggering recall that both authors demonstrate is what sets these works apart. Personally, I remember only major incidents in my early years. Judy remembers the smell of the dirt dunnys (waterless, outside toilets). She remembers the feel of the air when the “willy whirlies” (miniature, and in some cases full-blown tornadoes) disturbed her world, or in one case wrecked the shanty town she lived in. She remembers the feel of a wild nanny goat who rubbed in friendship at her leg and allowed Judy to drink from its milk sac, and the sting of a snake bite as she picked wood from a pile to hand-build tomato boxes.

Risk was something she shared her life with, risk from the natural world she lived so close to, risk from friends who misunderstood her intelligence, and risk from the one constant from which she could not escape — her family. That she carried this risk on her own shoulders from such a young age might make you think her family was careless of her, but no, it was more that this was the way life was lived. Judy wasn’t a slave, but she was forced into a servitude of necessity.

Her story begins with a short chapter in which her mother, for the first time, opens up to her. The date is undefined, but Judith is clearly a grown woman at the time of the conversation. The hardships her mother endured, to an extent, put Judith’s own struggle in perspective. I wondered, after finishing the story, whether that chapter was her way of erasing some blame from her mother, of taking it on herself, as she had always had. Perhaps? In the story she quotes her mother saying, “(Once) I cried because I had no shoes, until one day I saw a child who had no feet.” In any case, although Judith had yearned to know her mother’s story, I found it poignant that when her mother finally opened up, Judy couldn’t wait to break the spell, to stop her mother talking, to escape from the knowing. Perhaps her heart had hardened too much in survival to allow the space for that level of forgiveness.

If you read No One’s Child (did I mention that I recommend you do?), prepare yourself for Judy’s honesty. In particular she lays bare her feelings toward her father, which fester like an infected wound, seeping, dangerous, and ever-present. But, without her honesty and her extraordinary memory, this story would lose its color, its depth, its layers. As with Angela’s Ashes, what makes this a compelling read is that, through all the hardships endured by the author, a love of people, of community, of animals . . . ,and of life, shines thorough.

I did not come away from reading No One’s Child feeling sorry for Judith McNeil, but rather, buoyed by her humanity, and humbled that she took the time to share her life with me.

To quote from the book’s short epilogue: “They say lilies rise from the mud. I know they do.”

In case I forgot to mention it, you should read No One’s Child.

No typos to mention. Australian dialect, but not an issue for comprehension.