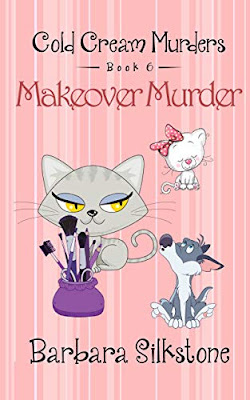 “Olive Peroni was having a tough day. Her makeover client died a mysterious death before the woman could attend her husband’s inquest—where she would explain why she ran over him as he stood in front of her car putting coins in a parking meter.

Now Olive is both a suspect in her client’s murder and a victim-to-be. Can the Cold Cream team from the shop on Starfish Cove Beach catch the shadowy killer before he strikes again—killing the last person to see the makeover lady alive—Olive?”

“Barbara currently lives in Central Florida with her eccentric kitty who adores Liam Neeson and chasing lizards (the cat, not Barbara).”

Ms. Silkstone is the author of several series, from Regency to contemporary cozy mysteries. She has a wicked sense of humor, her many series are light-hearted and her off-beat quirky characters somehow come across as real people. To learn more about Ms. Silkstone visit her website or follow her on Facebook.
Appraisal:

I do believe Makeover Murder is the best story of this series so far. When Olive’s home makeover client ends up dead, Olive ends up being the last person to see her alive, thus making her the prime suspect. Grams thinking she has the inside scoop for a story in the Starfish Gazette, submits her article which clearly paints a bullseye on Olive’s back for the shadowy killer.

Not having a bad enough day already, Olive has an unexpected visit from her ex-husband professing his undying love, and she accepts custody of the murder victim’s pet cat, Minette, who hates her. Puff isn’t too pleased with the situation either.

With no clues or leads, and two attempts on Olive’s life, Lizzy decides to turn her flirtatious banter and wiggle walk on the victim’s handsome neighbor. The plot moves fast with unexpected twists and plenty of surprises that leaves the reader guessing. The ending is a tense, edge of your seat finale with an unexpected turn of events, but highly satisfying. Olive or should I say Ms. Silkstone, has me convinced to carry around a can of aerosol hairspray, and not just for protection. If you are a fan of cozy mysteries you are sure to love these quirky but interesting residents of Starfish Cove. Each book in this series, Cold Cream Murders Mysteries, can be read as stand-alone. However, with Ms. Silkstone’s witty and easy going style of writing you might find yourself going back to read the whole series.

Makeover Murder is book 6 in Ms. Silkstone’s Cold Cream Murders Series and can be read as a stand-alone.

Thank you so much for the super review.
Virtual hugs all around!
Love from the gang at Starfish Cove!