Review: I Wear My Sunglasses at Night by Paul Aster Cohen 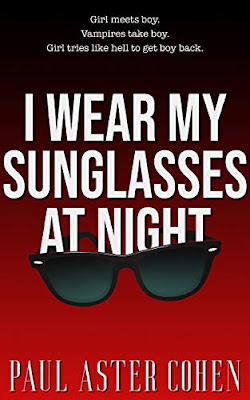 “On vacation with her boyfriend, Nicky soon finds herself in a predicament as he's kidnapped by a tribe of vampires. Miles from home, she reluctantly joins a dwarf and his coyote, who have their own score to settle with the beasts, and travel across the country to try and save her man before he's gone for good. In the shadows of recent California forest fires, will Nicky defeat the hungry, bloodthirsty horde and perform an impossible rescue or will she become a victim herself?”

“Paul Aster Cohen is an award winning journalist for The News of San Patricio weekly newspaper and a fiction writer. His novellas, I Wear My Sunglasses at Night and Once Upon a Time in Rehab, will be released in the coming months. He is working on the second novel of his Koufax series while seeking agent representation. He spends what little free time he has with his wife and three children who live with him in Corpus Christi.”

This novella, I Wear My Sunglasses at Night, was a welcome diversion. It’s a quick read full of action, gore, and humor. Nicky has convinced herself that her boyfriend is going to propose to her on this special trip they are on. Nicky is a health food freak and exercises every day. She has tried to change her boyfriend, Derrick’s, lifestyle to be like hers. Every time they argue Nicky strips
all her clothes off and the arguing stops. Nicky feels like she won the argument.

When Derrick is ‘kidnapped’ by being forcefully taken from their motel room by vampires, Nicky isn’t going to let these goons take her man. She puts up a good fight, beaten to a bloody pulp, but keeps going back for more. I kept expecting to learn she has a super power, but no, she’s human. There are some surprising twists that keep the story moving forward as Nicky, her delusional dwarf protector, and his pet coyote, Sheky, hunt down the tribe of vampires who took Derrick.

Mr. Cohen’s colorful imagery and unique vampires pulls the reader into the story. I generally try to stay away from horror stories, and didn’t realize one of the genre tags was horror until I started writing my review. I’d call it horror-lite. The ending confrontation blew me away. I did cheer for Nicky every time she killed a vampire, even though I was totally grossed out. I would like to see I Wear My Sunglasses at Night go through another round of editing. The one thing that threw me out of the story is in the beginning Nicky’s hair is brown. Later in the story her hair is blonde. The other proofing errors are just an annoyance.

Bottom line — I Wear My Sunglasses at Night is a unique story with vampires. It’s a quick fun read with proofing issues. If those kind of things bother you then maybe this story is not for you. Otherwise, if you like kickass female leads with a quirky sidekick you’ll likely enjoy this novella.

Lots of blood and gore as well as adult language that may not be acceptable for some readers. You’ve been warned…

More proofing misses than there should be for this length of story. Mostly missing or extra words, as well as a few wrong words.