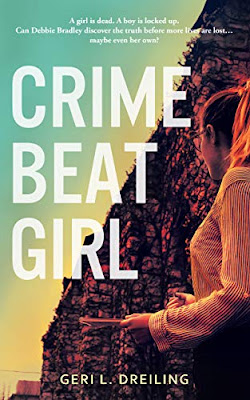 “A girl is dead. A boy is locked up. Can Debbie Bradley discover the truth before more lives are lost...maybe even her own?

A series of deadly shootings. An outbreak of stolen cars. When journalist Debbie Bradley returns home to St. Louis, the summer crime wave has started. And she's in the center: A witness, a reporter, a target.

Debbie's reasons for leaving behind her promising career in Washington D.C. were complicated. Her mother, a prominent lawyer, was diagnosed with cancer. Her engagement was cooling. When she got offered a job in St. Louis that she hadn't been looking for, Debbie recognized an opportunity. Or an escape.

But she didn't expect to come home and see a girl die. Debbie never planned to investigate a boy behind bars. And she didn't anticipate colliding with hostile cops and wary politicians. As her work gains attention, Debbie gathers enemies. Will her assignment to cover the St. Louis crime beat be her last?”

“Dreiling's background is eclectic. She is an award-winning alt-weekly journalist, a lawyer who represented clients in criminal defense matters, and she served a stint as the public information officer for the prosecutor's office in the city of St. Louis. Dreiling currently teaches media law and media ethics.”

I loved this book. It had a lot of different things going for it. Obviously the first is the story. Or actually multiple story threads with different mysteries involved, although ultimately they do tie together. Then we’ve got the issues with our protagonist Debbie, both dealing with her mother’s illness and trying to figure out what direction she wants her life to go romantically and career-wise. Last, we have the setting of St Louis, a city that is unique in so many ways, much of this coming through in the story.

If you’re into female sleuths, prefer Woodward and Bernstein to Perry Mason, or just like a good mystery or thriller, Crime Beat Girl would be a good choice. I’m hoping to read about other adventures in the future from Debbie.