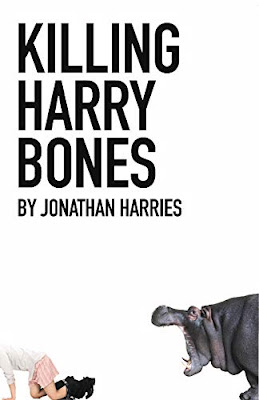 “In his first novel, Jonathan Harries flips the script and creates a world where the poachers are afraid of the animals—and then things really start to get weird.

Someone is slaughtering big-game hunters in Africa. And the deaths are particularly gruesome.

At the same time in Chicago, a disheveled and depressed Roger Storm, recently relieved of his duties as an ad exec, is also contemplating murder—that of his ex-boss, the despicable Harry Bones.

Then in what seems like a bizarre coincidence, Roger bumps into his supposedly dead childhood friend, the notorious arms dealer Freddy Blank, at a restaurant in Paris. Freddy and his ravishing partner, ex-Mossad agent Conchita Palomino, convince Roger to join them in a harebrained scheme to save Africa's wildlife and displaced people from a sinister global organization. In return Freddy promises to take care of Harry Bones.

Kicking, pleading, and dodging savage mercenaries while lusting after the voluptuous Conchita, a terrified Roger is hauled from Paris and London to the wilds of Ethiopia's Omo Valley, where under the darkest sky he has ever seen, an epic showdown takes place.”

Jonathan Harries, “grew up in Namibia, an extraordinarily beautiful and wild country where the desert meets the sea, with not a blade of grass in between. In my early teens we moved to South Africa where, after completing the perfunctory exercises necessary for entering adulthood, I began a career in advertising. While my love and fascination with wildlife began in Namibia, it grew into a passion in South Africa, and I spent every chance I got going to Botswana and other places where you could--and luckily still can--see animals in their natural habitat…

Since retiring, I've developed my passion for writing and storytelling into a second career--in fact, it is more of a vocation… The profits from all sales of my books are donated to animal charities. I hope they give you a laugh at the same time that they bring some awareness to the horrors of poaching and animal trafficking.”

You can see all of Mr. Harries books on his Amazon Author Page.

First, I have a small disclaimer, I do not fit the demographic for this book so my opinion may slip through. However, it is only my opinion. I also confess I picked this book up because of the cover. I understand that is a big “No, no.” I expected something along the lines of Monty Python, I was mistaken…

Roger Storm’s life is in the dumps, he’s been let go from his job as a top ad-executive. He’s depressed and drinking himself into a stupor. When in a bar he spots a childhood friend who supposedly died years ago. Freddy Blank tries to recruit Roger into his campaign to save Africa’s wildlife. But he’s real sketchy about what he wants Roger to do or what part he will be able to play in Freddy’s scheme. Roger is a whiny nerd and Freddy is a masterful manipulator. Roger follows him around because Freddy’s business partner is a beautiful woman named Conchita.

The plot moves at a believable pace, until Roger reminisces about the trouble he and Freddy got into at school and growing up through the years. These steps back in time help us understand Freddy’s character. Of course there is an arch villain out to stop Freddy’s plan because he is making lots on money taking big game hunters on safaris to get trophies mounted on their walls.

What we have here are master conmen conning other conmen. There is espionage, double agents, and mercenaries working for the highest bidder. This is a real man’s man book full of alpha males and poor Roger is right in the middle of it all. His life will never be the same.

If you are a manly man who loves adventure and dark humor, you will probably love this book. The bonus is Killing Harry Bones is free, and if you enjoy it the other two books of this trilogy are waiting for you to pick them up. So, just go for it!

Killing Harry Bones is book 1 of Mr. Harries, The Roger Storm Books. I will warn you that there are lots of strong adult language. But, if you are a manly man you can handle that, right?