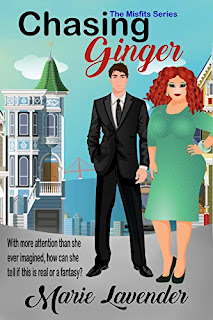 “Chased by a group of angry men. Saved by quite a hunk.

This is not the résumé Ginger Halloway ever imagined having. But thanks to a miracle pill, which makes her size 22 body instantly sexy, that’s what happened.

Yet, now Lance Franklin is showing interest in her, and she can’t figure out if he really likes her for her, or if it’s just because of a bizarre drug.

And her wild bunch of friends, The Misfits…well, they’re always getting her into some interesting situations.

So, yep, business as usual. Except for the guy. What the hell should she do about him?

As for Lance, he believes he’s lucky to have found Ginger. But can he convince her they should go for it?

With some new attention from the hottest guy she’s ever met, Ginger can’t help but wonder…is this all too good to be true?”

“Marie Lavender lives in the Midwest with her family and two cats… At the tender age of nine, she began writing stories. She majored in Creative Writing in college because that was all she ever wanted - to be a writer… After graduating from college, she sought out her dream to publish a book.

Since 2010, Marie has published 21 books in the genres of historical romance, contemporary romance, romantic suspense, paranormal romance, romantic comedy, dramatic fiction, fantasy, science fiction, mystery/thriller, literary fiction and poetry. An avid blogger on the side, she writes adult fiction, as well as occasional stories for children, and has recently started some young adult fiction.”

Ginger Halloway is desperate enough for a male companionship to sign up for an experimental drug testing program, for a new drug called Instasin. The doctors report the pill contains pheromones to attract the opposite sex. Her only obligation is to keep a journal while taking the pills. After three months the guinea pigs would report back with their findings.

Ginger is a smart, savvy, and mostly comfortable in her plus size body. She has beat down her insecurities about her weight, instilled from her parents while growing up. She tries to look at things through realistic eyes. When she meets Lance through happenstance she is immediately smitten. When Lance seems to be pursuing her, she writes it off as ‘the instasin’ effect. There is no way an intelligent, handsome, rich man could be interested in her.

Chasing Ginger is a unique, intelligent story that will capture your heart. Their journey together and apart shows character growth and acceptance. Ginger’s group of close friends, the Misfits, add levity and a sense of realism. Ms. Lavender takes a serious subject and has written an entertaining tale with smart dialogue and heart.