Review: Scent of a Dolphin by Barbara Silkstone 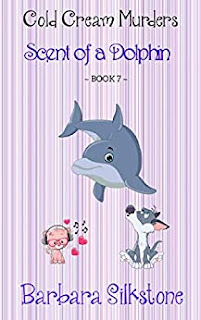 “When Olive rescues a dolphin entangled in fishing net a friendship develops between ’Fluke‘ and Olive. During a game of catch Fluke the dolphin and WonderDog discover a body trapped near Lizzy’s dock. Can Olive and Lizzy find the killer in her neighborhood before he strikes again? Plus, meet Grams' new beau.”

“Barbara Silkstone's most current series is COLD CREAM MURDERS ~ GLOSSY LIPS, SMOKEY EYES ~ SOAP ON A ROPE ~ SUN SCREAM ~ LAVENDER TOES. And a bonus novella GRAMS'S CHRISTMAS BABY. This series will have at least 6 books when complete. The adventures take place in the imaginary burg of Starfish Cove, Florida ~ a place near and dear to Silkstone's hometown of Redington Beach on the Gulf of Mexico just north of St. Petersburg, Florida.

Barbara currently lives in Central Florida with her eccentric kitty who adores Liam Neeson and chasing lizards (the cat, not Barbara)”

Olive finds a kindred spirit in a dolphin she rescues by cutting away the fishing net in which he has become entangled. She names the dolphin Fluke and he loves to toss Olive flotsam to entice her into playing catch. One of the things Fluke tosses to Olive is a small blob of green sparkly goo. Olive’s ever inquisitive mind is enthralled with this blob of goo that smells like a fresh ocean breeze. When Fluke finds a dead body stuck between Lizzy’s neighbor’s deck and the sea wall WonderDog understands Fluke’s alarm for Lizzy and Olive to follow him.

There is a lot going on in this story, Kal is out of town with his father, covering for him is a new young detective fresh out of training, Barney Piccolo. This murder is his first case so he ends up the butt of many jokes. It turns out the victim and her boyfriend were on a search for Al Capone’s secret stash in a set of bungalows on Scuttlebutt Point. There is also a TV journalist, Jerry Riviera, in town with his camera crew taping his hunt for Al Capone’s secret stash in the same location. Riviera has enlisted Grams to help him since Grams is the Silverfish Gazette’s ace reporter. Then there is that mysterious green goo. Olive is determined to find out what it is and whether it can be turned into a perfume? Olive’s white puffball of a kitten found her way into Olive’s blush. So Puff is now a pink kitten, even after Olive tried to scrub the blush out. And Gram’s has a beau she is totally smitten with.

Ms. Silkstone weaves all these threads into an entertaining adventurous mystery that keeps the reader guessing who the murderer is until the climactic ending that has a couple surprising twists. I have noticed that the Cold Cream Murders are becoming more complex. It surprises me that mystery crime writers don’t turn into criminal masterminds, or perhaps they do and they haven’t been caught yet.

As with the other books in the series, Ms. Silkstone includes a recipe that helps you make your own signature scent.

Scent of a Dolphin is book 7 in Ms. Silkstone’s, Cold Cream Murders Series.