The Tech by Mark Ravine 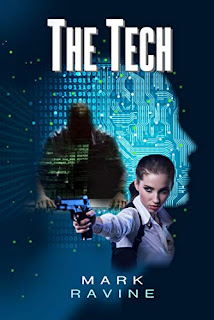 What offends her superiors most is that her intolerable antics have earned her one of the best track records in the FBI.

It’s too bad, some cases are better left unsolved.

When Cassidy is transferred to the backwaters of Arizona she finds herself leading a crew with so many black marks on their records, it’s a miracle any of them remain employed. Thankfully, their first case pretty much solves itself. But as Cassidy and her team continue throwing bad guys behind bars, a creeping sense of suspicion grows. The cases are easy, a little too easy, and troubling patterns become impossible to ignore.

Then things take a violent turn, and an elusive figure steps forward to help. But in a conspiracy big enough to topple kings, every player has an agenda—and misplaced trust will have devastating consequences.”

About all I can tell you for sure about Mark Ravine is that this is his first published novel. Or maybe that should be his or her first published novel using this name. I can’t rule out the potential of this being a pen name. I think he might be from the UK, but could easily be wrong about that. (See the FYI section for why I think that.)

For the most part I enjoyed reading this book. I liked Alexandra and her team. While the book is named after Mike Patterson, The Tech, Alexandra is really as close as the book has to a main character or protagonist, where the obvious focus of the story goes, but even without the title clueing the reader in it isn’t hard to see that Mike is going to be a critical part of what happens, even if most of the characters don’t realize just how much so most of the way. The cases Alexandra and her team are working on through the book are intense, and because she and most of her team are motivated to show they’ve gotten a bad rap in the past, they’re all focused and motivated to solve the cases.

Overall, I’d recommend this book to those who are into mysteries. If you’re a fan of technology and its possibilities, you’ll like it even more. But there are a few things that I didn’t like. One was a few times when the events played out in ways that stretched my ability to suspend disbelief to the limit. I also thought the book was longer than it needed to be, to the point where it was starting to drag.

Although the novel takes place in the US, Arizona most of the time, the small publisher that released this book is located in the UK and the author or editors or both are, I suspect, located in the UK. This is based on word usage or choices that fit the UK, not the US, scattered through the book. Not an issue, but caught me off guard a time or two.