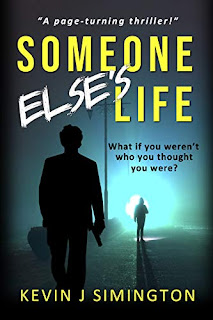 “What if you weren’t who you thought you were? A mysterious case of identity switching turns deadly when struggling private investigator, John Targett, becomes involved. As the plot deepens and more layers are uncovered, John must fight for his life against a well-organised crime gang who will do anything to remain undetected. As he is drawn deeper into the rabbit hole of subterfuge, he will need to risk everything in order to protect his daughter and remain alive himself.”

After many years as a teacher, Australian Kevin J. Simington quit in 2016 to write full time. He’s written a bunch of books, mostly science fiction, but some non-fiction and now a crime thriller to mix things up a bit.

There are some things about this book I absolutely loved. There is one other thing that, at least in this specific book, bugged the heck out of me. Possibly unfairly. We’ll get to that, first for the good.

The first thing I loved was the main character, private investigator John Targett. For a moment I thought he was a … I’ll use the term butt to hopefully dodge any backlash from the naughty word police. Then I realized he was really more of the smart version of that. A smart butt. He reminded me of the guy I like to think I see in the mirror some mornings, only better. I found myself laughing at his quips and smart-butt comments all the way through the book.

Good characters help a book, but you need a story to draw the reader in as well, and this was a great one. The “mystery” here was a wild situation, a grown man is convinced that he isn’t the baby his mother gave birth to, and he makes a good case for thinking that. But figuring out what happened decades later is a trick, luckily one Targett was up to. How it was going to shake out, if the explanation was going to be something off the wall or if they were going to figure it out at all kept me on edge the whole way.

Now for the thing that bugged me. English has several flavors and variations. (Some places that would be flavours.) While some people might take issue with reading a book that uses spelling conventions different from their home country. That doesn’t bother me at all. I read those books all the time. If an author is from the UK or (as in this case) Australia and uses the spelling of their home country, that’s no problem. Likewise, using words that never get used in the US (my home country) but are common to the author’s country is usually okay too. When a Scottish author has his Scottish character call someone a “wanker” (a word that virtually no one in the US would use in a non-joking or non-ironic way) then it adds to the story (I get that he’s in Scotland and understand what he’s saying). He’s Scottish, he talks like a Scotsman. But if the characters are natives of the US and live in California, from all indications most of them living there all of their life, and they call someone a wanker, it gets my attention for the wrong reason, throwing me out of the story because that character wouldn’t use that word. When the narrator refers to a bonnet and means the hood of a car, not a woman’s old-fashioned head covering or another character is talking about vehicles that had driven by a particular location and talks in terms of lorries rather than trucks, you start to wonder if these people are really Californians at all. Those and other subtle and not so subtle things in word choice and language usage threw me out of the story several times.

The above may be a non-issue to you or, maybe not even something you’d notice. In the overall scheme of things it isn’t that big of a deal. The good in this story far outweighs this irritant. If there is a subsequent book which, given the character seems possible and given the surprise twist at the ending, seems likely, I’ll still be eager to read it. But I’ll also be hoping that our American characters sound like they aren’t poorly disguised imports.

The author lives in and is a native of Australia, so he uses Australian spelling conventions.