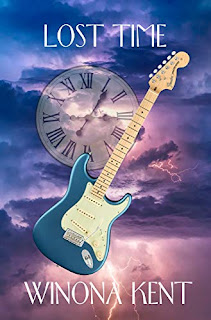 “In 1974, top UK band Figgis Green was riding high in the charts with their blend of traditional Celtic ballads mixed with catchy, folky pop. One of their biggest fans was sixteen-year old Pippa Gladstone, who mysteriously vanished while she was on holiday with her parents in Spain in March that same year.

Now it's 2018, and founding member Mandy Green has reunited the Figs for their last-ever Lost Time Tour. Her partner, Tony Figgis, passed away in 1995, so his place has been taken by their son, professional jazz guitarist (and amateur sleuth) Jason Davey.

As the band meets in a small village on the south coast of England for pre-tour rehearsals, Jason's approached by Duncan Stopher, a diehard Figs fan, who brings him a photo of the band performing at the Wiltshire Folk Festival. Standing in the foreground is Pippa Gladstone. The only problem is the Wiltshire Folk Festival was held in August 1974, five months after Pippa disappeared. Duncan offers Jason a substantial sum of money to try and find out what really happened to the young woman, whose mother had her declared officially dead in 1981.

When Duncan is murdered, it becomes increasingly clear to Jason that his investigation into Pippa's disappearance is not welcome, especially after he follows a series of clues which lead him straight back to the girl's immediate family.

But nothing can prepare Jason for the truth about Pippa, which he discovers just as Figgis Green is about to take to the stage on opening night—with or without him.”

“Winona Kent is an award-winning author who was born in London, England and grew up in Regina, Saskatchewan, where she completed her BA in English at the University of Regina. After moving to Vancouver, she graduated from UBC with an MFA in Creative Writing. More recently, she received her diploma in Writing for Screen and TV from Vancouver Film School.”

At its heart, this is a mystery with an amateur sleuth trying to solve a case. In this specific instance it involves a girl who went missing several decades ago and was never found. The setting for all of this coming about is Jason Davey, our amateur sleuth, filling in for a reunion and final tour of a band that was fronted by his parents years ago, He’s been recruited to fill in for his dad who has been dead a few years. That makes for some interesting situations. Because Jason isn’t his dad it requires adjustments be made by all concerned musically as well as emotionally at times. Even though the band in the story is fictional, the author has them singing what are often real songs, albeit obscure songs at times, from real songwriters. I found myself laying down the book to go investigate a song that got mentioned once or twice. Music nerds, consider yourself forewarned. To be clear, while this might seem like a distraction, it pulled me into the spirit of the story that much deeper. Then I’d come back from my musical interlude and Jason would move a step closer to solving the mystery as he uncovered one more strange clue that I’d have never anticipated, taking us to a conclusion that also surprised me.