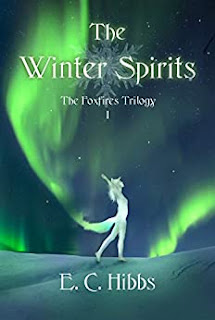 “If you sing to the Spirits, be prepared for their answer...

The Long Dark has come and the Northlands will not see daylight for two months. Silence falls with the snow, and Spirits roam the three Worlds. It is a time of beauty, magic, and danger.

When the Spirit of the Northern Lights steals his best friend’s soul, apprentice mage Tuomas is determined to find help. However, his own fledgling power gets the better of him, and he accidentally rips the Spirit out of the sky, trapping her in human form. Alongside his feared icy companion and the mysterious wandering mage Lilja, Tuomas begins a quest across frozen tundra and into ethereal Spirit realms.

But a terrible shadow lingers just out of sight, its gaze fixed on him. And behind her composed façade, the Spirit holds secrets of her own...”

From E. C. Hibbs website: “​I'm Emma: a professional dreamer usually found lost in the woods or in my own imagination. I'm also what you'd probably get if Wednesday Addams, Tinkerbell and Alice in Wonderland were thrown together.

I love fantasy in all its forms, especially when it helps me to see the real world in a new way.

Whether it's mermaids, vampires, spirits or fairies, I believe there is beauty in everything. Even the rugged and dark parts of the world, for without them, we wouldn't see the light.”

To learn more about Ms. Hibbs visit her website.

The prolog introduces a pair of traveling mage’s, Kari and Lilja. For many years they have wandered, ever since the Great Bear Spirit had brought Lilja back from the edge of death. She found she could not live peacefully in a village, too many people wanted too much from her, so began the wandering life. Kari, her older brother, joined Lilja so she wouldn’t be alone in her travels. They are both powerful mages.

Tuomas has come of age to be an apprentice mage in the village Akerfjorden, just south of the stark, brutal, but beautiful in its own right Northlands. When his best friend, Mihka, insults the Spirit of the Northern Lights she attacks and takes the boy’s life-soul, but leaves his body-soul intact which leaves Mihka in a coma like state. Tuomas vows to get his life-soul back. Henrik, the village mage, suggests seeking out the traveling mages. He thinks they may have enough power to retrieve his friend’s life-soul. So begins Tuomas’s quest during the season of the Long Dark.

At the beginning of his quest Tuomas rages at the night sky at the injustice that has befallen his friend, his emotions are raw and strong enough to pull the Spirit of the Lights down to earth and in human form. Now he has an angry Spirit to deal with. Try as he might, he can’t figure out how to get her back up to the World Above where she belongs.

Ms. Hibbs weaves an enchanting tale with several story arcs. Her characters are believable and well rounded. The scenic landscapes are beautifully described, as are the villages Tuomas travels through. Ms. Hibbs has not only invented a new land for her tales, but also a mythology for its inhabitants. The danger is palatable and intense. Misunderstandings are life changing.

If you enjoy unique epic fantasy stories, you should give The Winter Spirits a try. I don’t think you will be disappointed.

A few small proofing misses as in missing words or letters that change the word, and extra words.