Review: No Place to Hide by Opa Hysea Wise 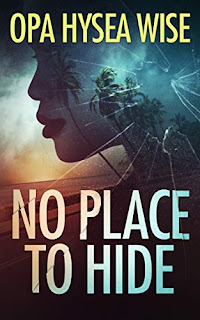 “Against hope, Smythe Windwalker Daniels anonymity is compromised and a creditable threat has been made against her life. As the threats ratchet up, she feels she has no place to hide. The danger impacts not only her life but the lives of those around her. She reluctantly accepts the FBI’s protection, hoping to testify and bring a promise of justice to a community.

Smythe is a woman with vision in her eyes and fire in her soul. From a young age, Smythe was discriminated against as a mixed-race girl in a predominately white neighborhood. She travels to Hawaii to escape the corporate rat race, only to get entangled in a pesticide poisoning cover-up attempt by a mega corporation. While on the run, she seeks to find meaning in events that now threaten her life. Through a series of misadventures, she discovers how all events are all woven together in this tapestry called “life.”

As she uses her past experience to find meaning in her present, she begins to see beauty in the midst of chaos. But the harder she tries to hide, the more difficult it is to survive.”

“Opa Hysea Wise is an American author, born to mixed race parents. She grew up across the fabric of the United States and currently resides out West.

At 57, with nothing more than a knowing Opa felt she was called away from her normal, relatively safe corporate life. She resigned her position, pulled her life savings out of the market and step by step followed the wisdom of her Beloved. Her footsteps led her first to Jack Canfield, considered America's number one success coach. Certified as a Success Principles trainer and speaker, Opa now offers half day and full day workshops focused on shifting people from where they are to where they want to be, in any area of their life.”

I think it would be fair to say that my thoughts and feelings on No Place to Hide are mixed.

Smythe, the story’s protagonist, is mixed-race and lesbian. I think stories that allow me to get into the head of someone who is not at all like myself is a positive, helping me better understand what life is like from other points of view. Based on author Opa Hysea Wise’s biography, it appears that her character has a lot in common with the author. Smythe is spiritual and works hard at not only improving her own approach to life, but a budding success coach as is the author herself. Smythe spends a lot of timing thinking on subjects related to spirituality and self-improvement. As the book’s narrator the readers who are in her head get to learn all about it. A certain amount of that is great, adding to the aspect of getting in someone else’s head above, helping me to see things from different viewpoints, and potentially helping me change my approach in some aspect of my life for the better. The problem is that Smythe spent an inordinate amount of time off on these tangents that while interesting, beneficial to some degree, and helpful (to a point) in understanding Smythe, ultimately caused the main story to drag and to get overshadowed by the tangents.

The main story was part mystery, figuring out who specifically was out to get Smythe, presumably to prevent her from being a witness in a murder trial, and even a bit of a thriller when things got especially tense. Although there were some parts of the story that stretched my ability to suspend disbelief to the limit, I enjoyed the core story, wondering how things were going to end and what surprises were going to pop up getting there. I also enjoyed a secondary story thread involving Smythe and her romantic life.

In spite of the parts that made the story drag I liked Smythe’s character and wanted to find out what happened enough that there was no way I wasn’t going to finish reading the book. So, on balance, I liked the book in spite of having some issues with it.

Review is based on an advance reader copy. I can’t gauge the quality of the final product in this area.