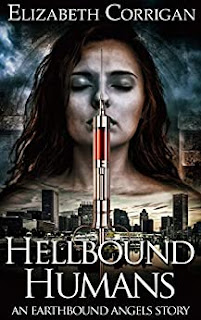 “Carrie, Khet, Cassia, Cama, Cain. She’s had hundreds of names through the centuries. Now she’s Chloe, an ordinary college student---at least as ordinary as a mind-reader can be when she has an angel for a boyfriend and a best friend who often forgets he’s not still a demon.

When Chloe discovers a fellow student has been murdered, she’s determined to stay out of it. Much as she wants to help, interfering has gotten her nothing but trouble in the past, and she needs to stick it out at the university for at least four years if she wants her degree. But when she inadvertently gives away her power at the funeral, she finds she has no choice but to use her unique gifts to track down the killer.”

Carrie feels she is in a good place right now. Gabriel and she are an item. She has started taking college classes to get a degree. So the next four years are planned out. You have to stay busy when you are immortal. However, Bedlam stays close at hand. He is living with Carrie, who is now Chloe the college student. Bedlam calls Carrie/Chloe, Khet. He always has and probably always will. I love Bedlam, he considers himself Khet’s protector and sometimes he forgets he’s not a demon any longer.

When a fellow student is found murdered and one is missing, Chloe has to look into it. Bedlam warns Chloe not to get involved because bad things happen to her when she does. But when Chloe comes across Adelaide, the missing college student, she has to do what she can to protect her.

The storyline is unsettling. There is a small group of medical students secretly conducting experiments in a surgical theater around midnight a couple nights a week. When the group suspects someone is spying on them they catch Chloe. That’s when things get really interesting. Now, I’ve read stories with the arch-demon Mephistopheles before, but I don’t recall him being physically described the way he is in this novelette. I liked the way he argued with the other lesser demons to stress the point he wanted Cama/Carrie/Chloe left alone and safe. He knows Lucifer has a vested interest in her, and Meph makes her comfortable while she is recovering in Hell. To know the whys and wherefores about Carrie you must read the Oracle of Philadelphia. That novel is Carrie’s story and the first book in the Earthbound Angels Series.

I love the twist at the end, which is orchestrated by Mephistopheles on behalf of Cama/Carrie/Chloe. He knew she would never condone his actions. I found Mephistopheles mesmerizing in this novelette. This is a captivating episode to add to the series.

Hellbound Humans is book 3.5 in Ms. Corrigan’s, Earthbound Angels Series. (That’s book 3 1/2 because it takes place between the full novels Archangel Errant - book 3 - and Angel in the Details – book 4.) It’s important to read the books in order.

No issues with formatting or proofing.