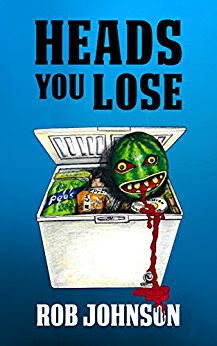 Trevor and Sandra are running a detective agency, but it’s not doing too well, they’re just about out of funds. When Trevor’s latest assignment goes off the rails and he ends up in hospital he jumps at the offer of a seemingly simple baby-sitting job in Greece.

But when the baby he’s looking after is a seventy year old ex-con called Ingleby with a dubious sense of humour whom everyone seems to be after for one reason or another suddenly the job isn’t so easy after all. And when someone tries to frame Trevor and Sandra by leaving various body parts in their van and freezer, life gets even more complicated.

Rob Johnson worked as an administrator and publicist for touring theatre companies before turning his hand to writing plays. Then the author undertook a series of jobs. He now lives in Greece. Heads You Lose is the author’s second novel.

Heads You Lose is the follow up to Lifting the Lid and picks up pretty much where the other left off. That being said it is relatively stand alone and it’s not entirely necessary to read the first novel (but you’re missing out if you don’t).
It takes a little time to get going, with Sandra and Trevor going through the process of leaving England, but once they end up in Greece and the other protagonists are in place it really motors.

Johnson excels at setting up multiple story arcs and inter-weaving them in increasingly intriguing and amusing ways. In this case a couple of ex-cons are looking for the third man, the guy who got away with the proceeds of the robbery the trio was involved in. Trevor and Sandra are bystanders.

However in parallel Donna is trying to get revenge for her husband’s death (an event in the previous novel). She blames Trevor and Sandra. Here Ingleby is the by-stander, but each arc affects the other. Throw in some local cops and this is a highly entertaining, well-constructed screwball comedy that is as enjoyable as it is well written. It ranks alongside Declan Burke’s work in terms of quality.

To say any more would ruin the story, I strongly recommend you give it a try.

Added for Reprise Review: Heads You Lose was a nominee in the Humor category for B&P 2015 Readers' Choice Awards. Original review ran January 26, 2015