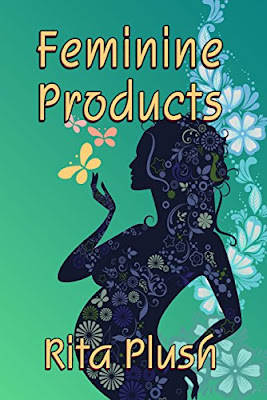 "Everyone’s got personal baggage, but Rusty Scanlon thinks she’s carrying more than her fair share. Owner of a trendy boutique in the outskirts of New York City, Rusty has an eye for fashion and a gift for messing up her love life. She doesn’t trust men. They’ve all abandoned her – the first being her carpenter father, who ran out on her and her mother when she was only six years old.

When she meets Walter Margolis, a guy who adores her, she thinks she has it all. Not so, she discovers when she tells him she’s pregnant and he suggests a paternity test. Rusty doesn’t know what to make of Walter’s reaction until he reveals the details of the accident he thinks he caused as a teenager, and the guilt that has tormented him all his adult life.

Rusty’s emotional rollercoaster ride is full of twists and turns that teach her and those around her about losing love and finding it, and what it means to be a family."

"Rita Plush is a writer, interior designer, and instructor of the decorative arts. She lives in Queens, New York. Her short stories have appeared in the Alaska Quarterly Review, Iconoclast, Passager, The MacGuffin, and others. She is the author of the novel Lily Steps Out, and a short-story collection titled Alterations.”

This is a gentle story gently told about a girl, Rusty Scanlon, whose father left her when she was six. This fact has informed her whole life so far. Rusty is successful; she owns a fashionable boutique in New York and loves her work. We meet her when she discovers she is pregnant - and delighted - as she loves the baby's father, Walter Margolis.

“A baby,” she whispers to the silent tiled room. “I’m going to have a baby.” She peers down and leans over, getting her face as close as possible to her belly and gives the air a little kiss."

The fact that she is pregnant makes her think and wonder about her father; she has always missed him and remembers him quite well, even though she was so young. Why had he left her, and her mother, Nadine?

The characters in this book are well drawn; Nadine is very much her own self - stylish and attractive, a yoga teacher who does her best to get on with her daughter. Their relationship is complex but loving.

Walter is an odd person with his own individual way of speaking; he is a serious man who considers every situation with slow deliberation, especially the fact that he is going to be a father. He has his own unhappy memories from childhood which make him wary and a bit withdrawn but he does love Rusty.

The book is written in sections; from different points of view, and from past and present circumstances. This is always a good thing in a book - it breaks up the action and fills out the whole story.

Not only does he take pride in their achievements, but when their mitered, mahogany-stained picture frames, and their hinged boxes are chosen for display in the showcase of the high school lobby with ‘Instructor: Jack Paul Scanlon,’ printed a little placard resting on a shelf in the case, he practically wears out the rubber on his Adidas tennis shoes, finding excuses to walk by and admire their work. I taught them that, he’d say to himself. I taught them that.

On the negative side the title Feminine Products seems a little strange. One immediately thinks of shampoos and perfumes and skin creams and it doesn't appear to have any connection to the story at all.

There are long passages in the book which could be lifted out altogether without disturbing the flow of the story; with a bit of tweaking they would make good short stories, particularly parts involving Jack Paul.

Overall the book is very enjoyable but because of the title and those long passages I am deducting one star.

That title is way weird. I thought the book had to be about tampons, etc.