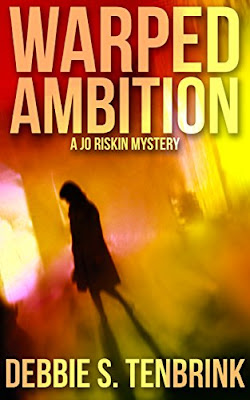 “When the battered body of a teenage girl is found in a dumpster, Lieutenant Jo Riskin is called to take the case. Investigating with her partner, Detective Lynae Parker, Jo uncovers secrets, loyalties, and ambitions that give motives to a surprising number of suspects, including a boyfriend from the wrong side of the tracks.

While immersed in her current case, Jo is battling her own personal demons. After two years, she is still grieving over the loss of her husband, who was killed in the line of duty. New information that could help solve his murder, and let her move on with her life, is within her grasp.

Barricading her heart, Jo is determined to solve both cases and bring the killers to justice.”

“Debbie S. TenBrink grew up on a farm in West Michigan, where her family has lived for over 150 years. She still lives within five miles of her childhood home with her husband, four children, and dog, Mojo (who is the only real-life character in her book). She has a Master’s degree in career and technical education, and she taught computer classes in two local colleges before beginning her current career as a software specialist for a law firm. In her free time, Debbie enjoys camping, hiking, sports, and any other activity she can use as an excuse to spend time in the great outdoors. Other hobbies include reading (of course), having long conversations with the characters living in her head, and an almost frightening interest in true crime TV shows. Her passion for writing began in childhood with short stories and poetry, and she can’t remember a time when she didn’t know that she would someday write a novel.”

This is book one of the Jo Riskin Mystery series and it appears to be Debbie TenBrink’s first book. What a great start. I’m ready for book two now.

Police procedurals have been a genre I’ve enjoyed reading over the years. After reading this book and trying to put my finger on why I liked it I came up with two big reasons.

The first reason is the obvious one. The mystery at the root of the case (or for this book, the two cases) that the protagonist is trying to solve needs to hit the right balance. It can’t be too obvious. If you’re convinced you know whodunit shortly after the book starts and you turn out to be correct, the book isn’t going to work. But the opposite, a last second twist that you could have never seen coming, maybe a random person walking off the street and confessing, is even worse. Warped Ambition hit that balance. The answer wasn’t obvious, but the clues were there. (I won’t say any more to avoid spoiling the story.)

The second thing that occurred to me was that I liked Jo Riskin and her partner Lynae and when I explored why I realized that it was because of their imperfections. They’re human. Imagine a detective who is perfect. They wouldn’t struggle. They wouldn’t misinterpret something. They’d never make any missteps. And books with this mythical perfect detective would bore the reader to death. It’s the imperfections of the detectives and their fighting through their own issues to get to the solution that make the story work. If sometimes we get to the answer before the detective, all the better. (I didn’t this time, but it wasn’t because the clues weren’t there.) Ms. TenBrink has a winner with Jo and Lynae. Yup. I’m ready for the next one now.