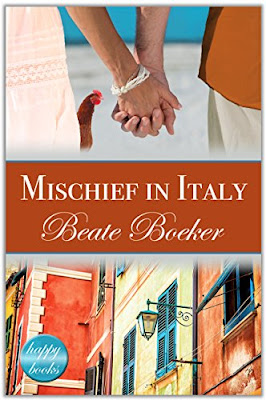 “All Henry wants is a serious talk with his grown-up son Josh about the wrong women in Josh's life. However, the conversation immediately spins out of control and somehow, they reach a compromise that leaves Henry highly uncomfortable. Has he really promised to place a personal ad in a newspaper to have more fun in his life? And why on earth did he agree to put the words 'house with pool at Lake Garda' into the ad? He doesn't want any gold diggers at his heels! To counteract the undeniable attraction of a villa in Italy, he comes up with an unusual concept for his ad, and from then on, mischief is running rampant in Italy.”

Beate Boeker describes herself as a cautious cosmopolitan. She lives in northern Germany and works as a marketing manager by day. Ms. Boeker is married, has a young daughter, and a university diploma in International Business Administration.

On her website she says… “It was inevitable that I should work with books sooner or later; I even have it in my name: Boeker is the word for books in the local German dialect and my first name Beate is straight from Latin and can be translated as ‘Happy’. With a name that reads ‘Happy Books’, what else could I do but write romances?” Also check out her Facebook page.

This book was an absolute delight to read. Told through multiple points of view that are clearly indicated we get to see how this father and son relate. It is clear they are better at talking about finances than feelings. Henry and Josh both agree changes need to be made in both of their lifestyles and a challenge is set. Josh needs to rein in his playboy lifestyle and Henry needs to get a life, he has become a recluse since his wife passed away five years ago. So Henry agrees to post a lonely-hearts personal ad looking for companionship. Luckily for us we get to see the responses from Cinderella, Lucinda, Ayleen, Andrea, and Carla.

I caught myself smiling and giggling through the meet-ups and the twists and turns as Tina, Carla’s concerned daughter, arrives from Germany to stage an intervention between Henry and her mother Carla. As the story progressed it was easy to become concerned about the number of little white lies flying around. At that point I was so involved in the story I was concerned that the lies had grown too big to be overcome without serious consequences.

Honestly, I read until my eyes could not stay open any longer. If you are looking for a quick, lighthearted, enjoyable read, I highly recommend this book. It will leave a smile on your face.

Added for Reprise Review: Mischief in Italy was a nominee in the Humor category for B&P 2015 Readers' Choice Awards. Original review ran August 8, 2014