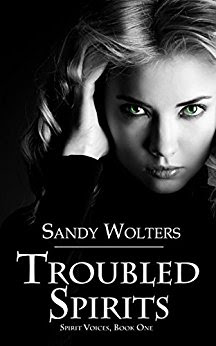 “Jody has been a conduit for ghosts her entire life. Not only do they come to her for help, but at times she experiences what they feel when they die. This gift or curse comes at a high personal cost—especially when a child is involved. There’s not a man alive who is willing to compete with troubled spirits.

Jared, a wealthy and determined high-powered P.I., has lived without love his entire life. In business if he wants something, he goes after it with a vengeance and is usually not denied. His life experiences have taught him that believing and trusting in others is a dead end street.

But on one magical night Jared meets Jody, and they soon find themselves on the brink of falling in love. But will the spirits surrounding Jody relinquish their hold on her in order for Jared to stake his claim or will their love disappear in an ethereal puff of smoke.”

Sandy Wolters: “My genre of choice is Romance with a paranormal twist.  Nothing beats a good romance especially when those you love and have lost come back when you need them most to assist you in unexpected ways.”

To learn more about Ms. Wolters please visit her website.

Jody sees and speaks with spirits of dead people who have not crossed over to the beyond. She has two dear friends; Nathan, a former police officer who is employed as a security specialist, and Terry, a promising artist. Having known each other since childhood they know each other’s deep dark secrets and are unconditionally committed to Jody. Communing with spirits takes a physical toll on Jody and it seems as if her powers are growing with detriment to her wellbeing.

Due to past failed relationships Jody has closed herself off to the possibility of ever finding a man who can deal with her gift. Until she meets Jared, Nathan’s partner. Jared is a wealthy P.I. with a hardened heart who grew up in a dysfunctional home. As soon as Jared sets his eyes on Jody he feels an irresistible attraction, which is a foreign feeling for him, and he’s not sure what to make of it.

The story moves slowly with overly descriptive prose for each character and the events surrounding Jody’s communications with the spirits. I found myself unwittingly enthralled. Troubled Spirits is written in third-person-omniscient POV, which put me in mind of Women’s Lit with an element of paranormal. The characters leap off the page and into your heart. Even Jared with his struggle to deal with his obsession with Jody and coming to terms with her gift. The dialogue is realistic and the spirits dilemmas are plausible.

Jody is a strong heroine and the spirit stories are captivating, heartbreaking, and uplifting at the same time. Troubled Spirits sets up a solid foundation for Ms. Wolters’ new series, “Spirit Voices.”