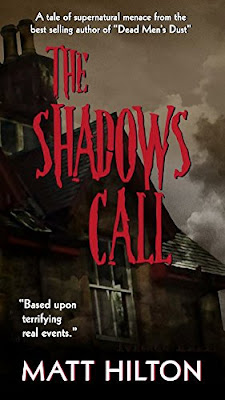 Jack Newman needs somewhere to live. He finds a house that’s large enough for his children to stay and, most importantly, is cheap. As an ex-teacher now working at a plumbing supplies business and paying maintenance to his ex-wife, money is in short supply.  But there’s something about the place that his friend, Sarah, doesn’t like. It feels oppressive. But Jack ignores her and takes the lease anyway.

Almost immediately Jack begins to experience events that are out of the ordinary - voices and a malevolent shadow that are all too familiar to him. Eventually Jack figures out the ghost that possesses the house is an ex-girlfriend who clearly wants to do him harm. As the strength of these occurrences grow they threaten Jack and Sarah’s very lives.

Matt Hilton quit his job as a police officer to become a full time author. Prior to this Matt spent twenty years submitting manuscripts to agents until in 2008 he secured a five book deal for his Joe Hunter series. The first, Dead Men’s Dust, won a variety of awards and became a bestseller.

As well as the Hunter thrillers the author also writes stories with a paranormal angle. Originally from Scotland, Matt now lives in Carlisle.

Matt Hilton’s works are characterized by pace and tight narrative with a steadily increasing tension that bursts at the conclusion. The Shadows Call is no different. Although sitting firmly in the paranormal genre there is a thriller element that forms the basis for the story.

Hilton immediately throws the reader several intriguing bones on the opening pages, is there really a ghost in the house? Jack is a non-believer, whereas Sarah, a work colleague who he likes, has a distinct interest in the area. There are parallels to my own situation where I am a sceptic, but open minded to the idea, whereas my wife has experienced events.

Hilton handles this ying and yang skepticism / belief very well, gradually increasing Jack’s acceptance and tying it to past events. Nothing is quite as it seems and in the last quarter Hilton turns the whole story on its head. I read this book in two sittings in 24 hours, the second at 3.30am. Even as a non-believer I made sure the lights were on when I walked around my house…

Added for Reprise Review: The Shadows Call was a nominee in the Paranormal category for B&P 2015 Readers' Choice Awards. Original review ran December 30, 2014.