Review: Tales of Aldura: Tears of a Seeress by Susan Stuckey 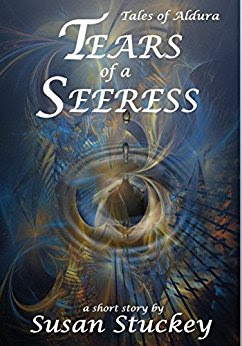 “If Father Tree dies so will all children and creatures of the Twin Goddess including the Njae. Arael's Rest, the home of the Kalwyn Njae, has been under siege by the Halurdow for more than a generation. Added to the enemy, a plague has struck the Njae--a plague that is always fatal. If any Kalwyn Njae are to survive, they must flee their home. Seeress Illyani and her son, Glimrion, fight to save Father Tree and stop the Halurdow. Will they succeed?”

Learn more about Ms. Stuckey by checking out her website and Facebookpage.

Tears of a Seeress is a prequel to Phaedra. It’s a powerfully emotional tale about love and commitment for family, clan, and hope for a better future. Father Tree grows in the heart of Arael's Rest, the home of the Kalwyn Njae, who have been entreated to its protection. The Njae have erected a Barrier Wall surrounding Arael’s Rest, which will be imbued with magic following their exodus, to safer territories. The Halurdows, blood-thirsty warriors of the Dark God - Urdow, are sworn to annihilate everything the Twin Goddess has created, are fast approaching the gates of Arael’s Rest.

Seeress Illyani and her entire family, are facing heart-wrenching decisions before the exodus through a secret tunnel under the Barrier Wall. The plot moves fast, as there are only fourteen pages. However, that doesn’t mean this is a light read. Ms. Stuckey has chosen her words wisely to weave heart-breaking tension and reflection to draw the reader in quickly while setting up the premise. The main characters and setting are well described. The magic is well thought-out and fascinating. I am glad I picked up this short story and highly recommend all of Ms. Stuckey’s stories in her Tales of Aldura series. She is a masterful storyteller and will not let you down.

Although Tears of the Seeress is set earlier in the time-line, than other Tales of Aldura series, I would recommend reading this after reading Phaedra.

No errors in proofing or formatting.

What a pleasant surprise! Thank you ever so much for reading and reviewing. I'm delighted you enjoyed it!!!

You're welcome, Ms. Stuckey. Thank you for dropping in and commenting.