Review: One Sip at a Time by Keith Van Sickle 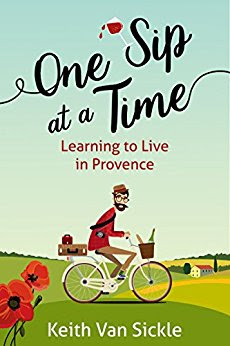 “Can a two-career couple really pick up stakes and move to Provence?
Keith and Val had a dream – to live in Provence, the land of brilliant sunlight, charming hilltop villages and the deep blue waters of the Mediterranean.
But there were two problems: they weren’t French speakers and they had full-time jobs. So they came up with a plan…”

At its heart One Sip at a Time is a travel memoir. And yet it is different than most travel memoirs I’ve read in ways both good and … not really bad, not really good, definitely different. I’ll try to explain.

There are two things I tend to look for and expect in a travel memoir. The two words in that phrase are a hint. For the travel part I’m hoping to get a sense of the place the person is traveling to or through. That might include something about the scenery, the culture, the people, or whatever it is that made this place special, different, or worth visiting to the author. The memoir part is the more personal. It’s what sets a travel memoir apart from a guidebook or brochure from the local tourism office. Ideally this part is not only how they react to the experience of traveling, but also how it changed them.

Typically, that last item comes from a narrative that is mostly chronological with (sometimes literally) one foot in front of the other, going from point A to point B. This book isn’t like that. Although it has two parts that are tied together chronologically, it’s more like a series of essays or true stories that related different experiences with no obvious order or transition from one to the other. What that meant was that rather than having a climax or realization of how the trip had changed the author near the end, it happened (or the reader noticed and realized it was happening) through a gradual process. If anything, that’s more realistic in how change really happens and it worked for me as a reader.

As for the travel part, I thought the author’s insights into the culture and people went much deeper than a typical travel memoir would, largely because his goal wasn’t to be a traveler, but to be an actual resident (even if short term) of the area of France he was visiting. That paid off, for him and for us.