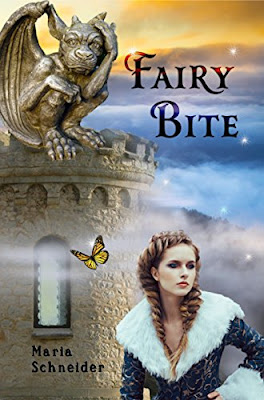 “Shunned and ridiculed ever since a fairy mistakenly bit her, Ally leaves her village knowing it's the only way her family can resume their normal lives and be respected. She heads to Wendal, hoping the shifters there won’t care about the little problems associated with the effects of a fairy bite.

Before she is even halfway there, she discovers that the fairies may not be finished ruining her life. If she wants to leave Birk, she’ll first have to contend with the little people, a very ornery gargoyle, more than one prince and, of all things, an enraged dragon.”

“Maria saw her first dragon while gardening. She asked the gnome to take pictures, but dragons are shy and very fast. One of the fairies finally snapped a shot, but just as she handed it over, the dragon came by and flamed it to ashes! Neither of us wants to get our fingers burned a second time so, sadly, there will not be pictures any time soon!”

Because of the fairy bite Ally got at age eight, she can sense and borrow magic from others. She also describes herself as ugly with distorted features due to the fairy bite. It took me a while to warm up to her, she seemed so pathetically withdrawn. Because of Ally’s situation or status for the last twelve years she grew up with no friends. Being a loner she is also a deep thinker, logical, and smart. The first friend she makes is Landry, a brownie, who is on a mission to find a gargoyle to collect on a “boon” (a term for favor or request) to free his family from slavery and abuse in Prince Kal’s prison near Anton. Prince Kal has declared every magical creature is his own.

The plot moves at a nice pace as the small band tries to overcome the nullifying magic of Prince Kal’s wizard. The rescue of all the shifters that have been captured is a far bigger job than expected. Prince Kal is nasty piece of work and his wizard is diabolical. The dialogue fits the story and all the characters remain true to themselves and grow accordingly. The twists are fast, furious, and unexpected. Fairy Bite is an engrossing, unique story, which is cleverly woven together, that goes above and beyond what I expected.

Fairy Bite is book three in the Dragons of Wendal series. I think book three could be read as a standalone. However, I highly recommend the whole series.

Email ThisBlogThis!Share to TwitterShare to FacebookShare to Pinterest
Labels: 5 Star, Fantasy, Romance, YA