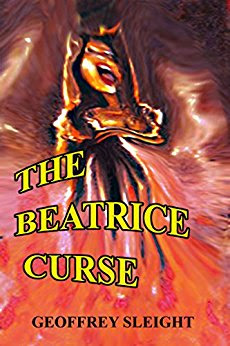 “Beatrice was burned at the stake in 1763, accused of witchcraft. In the agonising moments of her death she uttered a curse that would come to haunt her village every hundred years. When an aspiring writer arrives in the village seeking peace and inspiration, he is drawn into a web of mysterious secrets on the anniversary of her burning. Beatrice is rising and soon the young man finds himself the target for her terror.”

Geoffrey Sleight is a British novelist who writes paranormal mystery thrillers. He has six other books, including The Beatrice Curse II. Feel free to check out Mr. Sleight’s other books on his Amazon author page.

In the glory days of the 1960s in London, England, Mark Roberts aspires to be a novelist. To do this he needs to leave the hustle and bustle of London. With the blessings of his parents he finds a cottage to rent for a month in a remote small village. Note to authors: if you wish to try this, check out the village’s history first.

The characters are all well-defined, realistic, and diverse. This village does not accept strangers easily. However, Mark is able to make a few friends. Unsuspecting Mark arrives in the village a week before the town’s yearly celebration of Beatrice’s burning at the stake. This year is especially auspicious because it’s the two-hundredth anniversary of Beatrice’s burning and the casting of her curse. According to legend the curse states Beatrice will rise from the dead every hundred years to wreak vengeance on the village.

The dialogue is realistic and engaging. Mark’s curiosity gets him into trouble quite often as events begin occurring, which distracts him from concentrating on his novel. The plot moves at a good pace and the scenes are well staged with several twists to keep the reader on the edge of their seats.

I do have a couple of nit-picks though with repetition, which gets tiresome. I don’t need to be told umpteen times that Malcolm is Barbara’s fiancée. Or that Josh is the woodskeeper. They are both very memorable people. I’m sure there were more but these two jumped out at me.

The Beatrice Curse has a bit more of a horror element than I generally read. However, I did enjoy this creepy story. I think anyone who enjoys the intensity of suspense mysteries will enjoy The Beatrice Curse.

Now I need to go enjoy a normal romance novel.

Mr. Slight uses British English and slang. There is adult sexual content, graphic violence, and a small number of F-bombs. For those interested there is a book two for you to jump right into after reading The Beatrice Curse.

I came across some proofing errors. Mostly missing words, a few wrong words, and extra words.