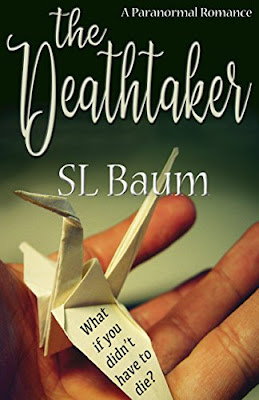 “Krista can smell disease and decay. She walks through life being able to pinpoint what is wrong with the people around her, and can tell whether or not they have long to live. She’s spent the last few years moving from town to town, looking for someone to help, someone who needs a second chance at life. But she didn’t plan on staying in a small town, and she didn’t plan on finding someone to love… in fact, she didn’t plan for anything that Cedar Creek had in store for her.”

A former high school math teacher, S.L. Baum now works as a substitute elementary school teacher, chauffeur for her kids, and novelist. She lives with her family in the Southwestern United States. Her The Immortal Ones series has four books, thus far. She is the author of two series for the YA audience, The Immortal Ones and the Lush series (actually a serial with novel size installments). The Deathtaker is the first of what appears to be a new series aimed at a slightly older audience.

I’ve read all of S.L. Baum’s books and liked most of them. The Deathtaker is my new favorite, taking over that position from Baum’s first book, A Chance for Charity. Part of that is I like being introduced to new characters, what makes them special, and the intricacies of the new story world. This book grabbed me immediately when the prologue gave us a sample of what makes Krista special and a glimpse of that quality at work. I quickly became invested in Krista, the difficulties her life’s work created for her, and saw what the main difficulty or conflict she was going to have to deal with in this story was going to be. How that played out was both satisfying and a setup for what I expect will be an ongoing series.

Added for Reprise Review: The Deathtaker by S.L. Baum was a nominee in the Paranormal category for B&P 2015 Readers' Choice Awards. Original review ran February 7, 2015

Review based on a pre-release beta version, so I can’t judge the final product in this area.