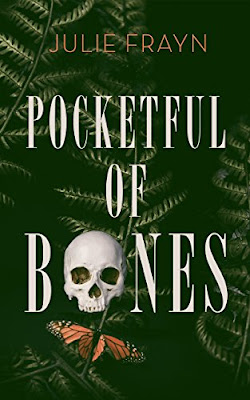 “Finnegan MacGillivray, red-haired, freckle-faced social pariah, finds solace in his mother's garden while she entertains ‘dates’ in his home. When an accident takes the life of a friend, Finnegan buries the evidence amid the purple dead nettle and bougainvillea, and unearths a treasure trove of human remains. Did his house rest atop an ancient burial ground? Or was there a killer tucking him into bed at night?

His fascination with bones grows as fast as his obsession with his mother. She rejects his advances, and he escapes to the other side of the country. Years later, he returns to his childhood home, to the secrets and the guilt and the bones -- and to fulfill his destiny.”

“Julie Frayn is a multi-award-winning Canadian author of novels and short stories that pack a punch. And a few stabs. She is fluent in three languages — English, sarcasm, and profanity. Although she didn't invent swearing, Julie wields it like the visionary vulgarian who threw the first f#(k out into a crowd. She writes psychological suspense filled with a lot of death, a bit of sex, and sprinkled with the F-word (sometimes… not so sprinkled). Her favourite pastime is murder night (translation: watching crime drama and drinking beer with her daughter). Her least favourite pastime is writing author bios (translation: author bios — yuck).”

They say there are only so many stories and, at a high level, I understand they’re right (whoever they are). But it’s the added detail that makes or breaks a story and gives it its unique flavor. In the case of Pocketful of Bones, I’m sure it fits one of those high-level templates, but it has so much in the details that isn’t like anything I can remember reading before that I can’t imagine what pattern it might fit. It’s a strange story that has me liking and pulling for characters that I could easily find repulsive, yet don’t, even when they do things that are … we’ll call them “not good.” Bad is going too far. (Okay, maybe I’m trying to cover for them here.) But I understand why they do what they do. I’m sure you would too.

In case it isn’t apparent, I liked this book, both the characters and the strange, out-of-left-field life that they lead. If you like slightly offbeat stories and psychological suspense, you should too.

Did you read the author’s bio? Obviously if a swear word or 50 are going to be an issue for you, this isn’t your kind of book.

Canadian spelling. You can deal with an extra ‘u’ heure aund there, riught?

Thank you, Al! I'm going to start inserting an extra U heure, theure, and euverywheure... :D

Love the review; loved the book!

Thanks four the comments. (The extra u doesn't work well there.) I agree, Laurie, it's a good one.

The technical term for characters who are not good and not bad may be (if not 'just right' which is another possibility) 'flawed'?

Flawed would be an accurate term for these characters, Judi.