Review: My Life as a Bench: Jaq Hazell 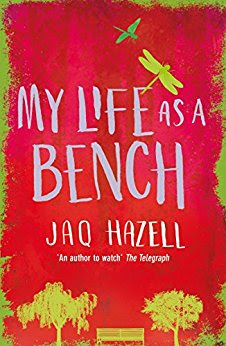 “Ren Miller has died aged seventeen and yet her consciousness lives on, inhabiting her memorial bench by the River Thames in London. Ren longs to be reunited with her boyfriend Gabe, but soon discovers why he has failed to visit. Devastated, she must learn to break through and talk to the living so she can reveal the truth about her untimely end.”

Jaq Hazell won the Rubery Award (for indie and self-published books) in 2017 for this book. She has been knocking on the awards door for some time now, and this award is well deserved. She is a British writer, now living in London, who has an MA in Creative Writing.

What a cracking title! It would be a pity indeed if such a funkily titled book should not prove to be fully funky throughout. So, let me assure you at once that it is excellent.

Like so much YA fiction, it can be enjoyed by adult readers as well as teenagers. (I’m 65 and I was blown away by it.)

The tension is ratchetted up constantly by the reveal happening like a striptease. It is two thirds of the way into the book when the reader discovers why Ren is now a bench. By that point I was wild to know what had happened!

Grownups might imagine that the concerns of a teenager could prove facile: I did not find that the case at all. The high-octane heartache over trivialities which might cause the world to end (I remember those) is so believable, and the pace of the book so good, that you tumble along with the protagonists as they fall in and out of love on Facebook and over fried chicken lunches.

The author draws older characters beautifully too – and gives them plausible things to do which are nicely observed, sometimes poignant and sometimes very funny. Getting inside the head of a teenager isn’t easy (I can hear parents sighing from here), but Hazell makes a lovely job of it. Ren’s take on the adults in her world feels fresh and accurate.

This oldster didn’t need the ‘slang definitions’ aid at the back. Which is not to say that I am down wiv da yoof, more than said slang, most of it, isn’t as ‘now’ as the author seems to think.

One of the puffs on Amazon (‘Nudge’) says of the book “This would be a good discussion aid to issues raised in schools and colleges, but equally book clubs would find it fascinating”. Couldn’t have put it better myself. Nag your book club to read this. Or just get on and read it yourself. It’s my best read of 2018 to date.

Wow! What a great review. I think I'm going to have to read this book.