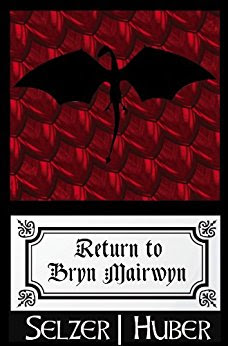 Desmond McKenna returns home to England to finish out the final days of his life. He’s sad and lonely and his long years on the earth have only fueled his desperation. But a revelation could change all that as Desmond still learns something after all this time.

Jennifer Selzer and Daniel Huber have written three books together. Selzer was born and raised in Los Angeles. She wrote her first book at 11 years old. Huber grew up in on the Central California coast and currently lives in an L.A. suburb with his wife.

You can learn more about them at their website.

Return to Bryn Mairwyn read like a preview, or perhaps an epilogue, of a longer story. Perhaps that’s what the authors have in mind.

Immediately, there is a connection with Desmond McKenna. He’s returned home after a long time away with the feelings that it’s time to end things where they began. The desperation is there, the loss, the loneliness. He’s ready to end his long, long life that has been filled with heartache and struggle.

For Desmond, an issue is that no one understands his plight. He’s gone through his life with no one else like him – or so he thought.
When Desmond meets a similar person, it adds doubt to his decision. Instead of completely letting go, he turns into his true form of a dragon and feels the joy that he was originally intended to feel.

What does he ultimately decide? That question is unfulfilled with the story left open-ended for the reader to fill in the blanks.

The short story was compelling enough for me to want to know more and find out if Desmond is able to find peace. So, if there is a novel-length book to this short story, it’s likely I will read the rest of Desmond’s story whether the tale is about what came before or after this story.

Added for Reprise Review: Return to Bryn Mairwyn by Selzer and Huber was a nominee in the Short Story category for B&P 2015 Readers' Choice Awards. Original review ran May 19, 2014