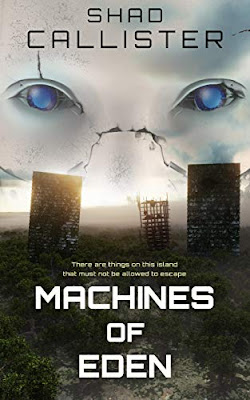 Set in a post-apocalyptic world of constant warfare where the Grays (the establishment) leverage technology and the Greens (the seething masses) make do with what they can steal and re-purpose. A brilliant scientist has created an island paradise aptly named, Eden, to act as a model new beginning for humanity. But the scientist’s assistant goes wacko, reprograms the AI computer and plans to use the technology on Eden to re-purpose the whole surface of the earth by using nanotechnology to turn everything man made into potting compost.

Shad Callister splits his time between the mountains of Utah and the rivers of northern Alabama. Machines of Eden is his debut novel.

The book’s opening indicates that the war is finally over and our exhausted hero, John Fletcher, hitches a ride home on a transport flight. The flight is diverted, attacked, and John awakes, battered and bruised, on a tropical island beach.

From here, he penetrates the compound containing the AI computer controlling Eden and learns about the doomsday plans. Of course, there is a ticking clock, and our hero has to overcome enormous odds, both physical and intellectual, if he’s to save the world.

Nanotechnology, super computers, Artificial Intelligence, cyborgs, robots. Yep, this story has them all. Now don’t expect to get to know the characters in depth, or to get a visceral feeling for the settings. This book isn’t about those things. It’s about action. And when you’re riding a high-speed roller coaster, you don’t have time to take in the scenery.

I enjoyed the heck out of this read. The science is informed enough to make sense. The doomsday scenario is logical. Our hero can do more damage with a screwdriver and ring-spanner than anyone could possibly want. The crazy people add spice, and most enjoyable, the AI computer, Eve, is beautifully written and a lot of fun.