Review: Those Which Remain by Angela V. Cook 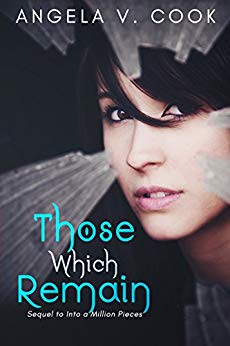 “In Into a Million Pieces, seventeen-year-old Allison solved her sister’s murder, barely escaping an attempt on her own life. Now, with the past behind her, Allison is finally getting a taste of teenage normalcy—going to school, hanging out with her best friend, and sharing it all with her loving boyfriend, Ren. Life is good.

But it doesn’t stay that way. It never does for a succubus.

When Allison's nature draws in a predator, shattering her sense of trust and safety, she realizes the succubus curse is behind all the darkness and heartache in her life. Determined to end it, she tracks down a distant relative with knowledge about the curse. But more questions are raised than answered when Allison meets the mysterious and wealthy Leona Doriano. Suddenly thrust into a dangerous world of money, power, and deadly secrets, Allison must find a way to break the curse—a curse not everyone wants broken—before she’s drawn in too deep.”

“Angela V. Cook lives a very unexciting, but never boring, life with her husband and two children just outside of Detroit. Like most writers, she's been making up stories for as long as she can remember and can't imagine a life that doesn't involve creating worlds.

Angela loves to write novels for teens because it's the best outlet for her sarcastic personality, immature sense of humor, and love of romantic firsts. Her idea of the perfect day involves a quiet house, a good book, and a piece of cheesecake. Or two.”

Those Which Remain begins a few months after Into a Million Pieces ends. Allison’s life seems to calm down so she has a short time to enjoy being a somewhat normal teenager. However, during Christmas break events drive Allison out of the safe haven of her paternal grandmother’s house. Now she has no choice but to search for relatives from her mother’s side of the family. She is determined to find a way to break the succubus curse that has plagued the maternal side of her family who she finds in a small town in North Carolina.

All Allison wants is to learn about the curse and how to break it. However, her great-grandmother, Lenora, has other plans for her. Karma, Lenora’s daughter, befriends Allison, but speaks in riddles and won’t answer Allison’s questions outright. This is where the story bogged down for me. Allison seems dimwitted, refusing to understand what Karma was trying to tell her. I felt like a lot of time was wasted and the story got too wordy until about two-thirds of the way through, where the story picks up and the plot started moving forward fast and furious with twists and tension. Backstory is added in ways I wasn’t expecting, adding more depth and understanding.

There is dramatic, highly emotional, and surprising climax to one of the story arcs. Then as Allison tries to come to terms with her new life, she insists on trying to explain her sudden disappearance from her paternal grandmother’s house. Allison wants a clean slate, and I’ll be damned if her grandmother doesn’t surprise her with more history Allison wasn’t aware of. This is a satisfying closing of this duology. If you enjoy contemporary coming of age stories with paranormal elements you will probably enjoy this duology.

Those Which Remain is book 2 in Angela V. Cook’s PIECES DUOLOGY series. I do recommend reading book 1, Into a Million Pieces first.

Nothing significant enough to note.