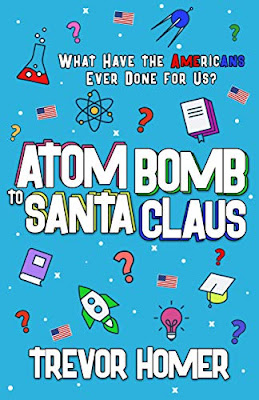 “Three cheers for the ingenious, inventive, United States of America!

From the kitchen to the office to outer space, America has been at the forefront of the advances of the human race for the last two centuries. It's given birth to more new products, devices, medicines, leisure pursuits, sports, musical genres, and vehicles than any other country or people ancient or modern. More Nobel prize winners come from these shores than the next five countries combined.

Atom Bomb to Santa Claus celebrates the country's pioneering drive by describing some of its greatest innovations and some of its greatest – and most surprising – inventors. It challenges the imagination to know that the same country that gave the world the artificial heart and e-mail, also originated sliced bread and Chinese fortune cookies. Guaranteed to entertain and enlighten, Atom Bomb to Santa Claus is an amazing chronicle of some of America's most important and imaginative creations.”

“Trevor Homer was born and educated in the industrial Midlands of England and is a former British Amateur Champion golfer who represented England and Britain 28 times. Homer is the author of The Book of Origins which was translated into six languages and sold to eleven countries. He is also the author of Born in the USA which was published in the USA by Skyhorse of New York. Married with two sons and three grandsons, Homer now lives in South Staffordshire. This book is based on a lifelong obsession with obscure facts, and a deep admiration of the great democratic experiment which is the United States of America.”

If you’re into history, interested in knowing some back story of how inventions and innovations came to be, and a bit of a trivia buff, have I got a book for you. Some of these things you probably know about, for example I knew Thomas Edison had helped harness electricity and invented the lightbulb, but other things might be new even on subjects you know. (If I ever knew General Electric Corporation was founded by Edison, I’d forgotten.) The author is British and in some instances his viewpoint might be interesting, seeing how a foreigner perceives something the originated in the US or how what reached the UK was subtly different from the original. For example, the discussion of a dance called the Okey Cokey confused me. Then I realized that the name of what I think of as the Hokey Pokey (yeah, the one where you put you right foot in) goes by a few slightly different names in different areas. If you’ve got a thirst for trivial knowledge, this is a fun read.