Reprise Review: Vlad to the Bone by Beth Orsoff 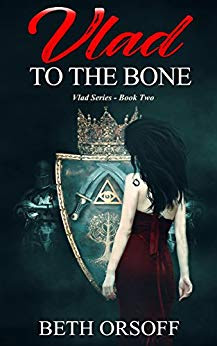 This continuing saga of Alex and Gwen picks up two years after Vlad All Over ends. Alex and Gwen seem to have found a way to put their animosity aside for the sake of their son, David. They have joint custody worked out, perhaps a little too well, according to Gwen’s new boyfriend Robert. When it becomes necessary for Gwen to return to Romania because of her claim as a legitimate heir to Vlad Tepes, old habits return and animosity takes another hold.

When Beth’s parents told her they didn’t send her to college to be a professional lifeguard, she moved to California and enrolled in USC Law School to become an entertainment lawyer. She also became a regular attendee of the UCLA Extension Writers Program workshops. She lives in Los Angeles with her daughter.

To find out more about Beth visit her web site and read the author interview she gave here at Books and Pals with BigAl.

I was quickly drawn into this fascinating and multi-layered story line, honestly how do authors come up with this stuff? Beth Orsoff was able to capture Gwen’s and Alex’s complex personalities perfectly as well as all the supporting characters. The story never lags and gets quite racy at times, which I thoroughly enjoyed. I found the relationship between Gwen and her best friend Zoe was one of my favorites. Their conversations were realistic and humorous. Zoe was a steadfast, honest friend Gwen could always depend on.

The journey that Alex and Gwen were on was a hard one, I sympathized with both characters. Alex was the perfect alpha male who would take charge and thought he always knew the best way to handle any situation. It was difficult for me to watch when he got scared. I would not want to be the one to oppose him, he was ruthless. Gwen never hesitated to oppose him, she was as strong willed and proud as he was. As a result, she would make decisions just to spite Alex, not really taking her or her son’s best interest into consideration. Her pride was a problem for me.

The children in this story I felt were captured very well. Isabella is now a sassy ten year-old and David an adorable two year-old. The well-being of both was in the forefront of everything Gwen did concerning her and Alex’s joint custody of David. It was interesting to watch how she and Alex handled the kids and the single-parent dating scene. Since the story is mainly told through Gwen’s point of view, we mainly saw how she handled it with her boyfriend Robert (Dr. Bob) and only one of Alex’s girlfriends, Brianna, who was the latest and most serious.
The twists in the plot about Gwen’s claim to Vlad Tepe’s blood line drove the plot forward in interesting ways. I found them captivating and compelling. It is clear how Ms. Orsoff’s storytelling skills are growing as well as her understanding of the human condition. I will not hesitate to buy her future books; they are always creative and unique.

This is a sequel to the book Vlad All Over. That book should be read first for an adequate understanding of the backstory to the events in Vlad to the Bone.

Added for Reprise Review: Vlad to the Bone by Beth Orsoff was a nominee in the Chick Lit category for B&P 2013 Readers' Choice Awards. Original review ran January 17, 2013

I found no errors or issues.