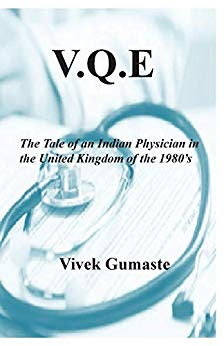 “In 1980, after completing medical school in India, a young Indian physician lands in Britain in pursuit of his dream to get to the United States.  He is young, a full 26-year-old, ambitious and opinionated. The two and half years that he spent in Britain prior to coming to the United States prove to be eventful years and this book captures that period

The narrative is set in Great Britain of the early 1980's and comprises a medley of experiences: of a young, nationalist Indian coming to the land of his colonial masters, a new medical graduate negotiating the travails of an international medical career and of an objective spectator looking down upon this once great power. Thrown into this unlikely cocktail is the political backdrop of Britain in the 80, s- the rise of Margaret Thatcher, the Royal Wedding of Princess Diana and Prince Charles, the Falkland War and racism.”

“The author is an academic and political commentator based in the United States. Passionate about India, he is an avid writer and has written several op-eds and columns for mainstream Indian newspapers like the New Indian Express, the Hindustan Times, the Sunday Guardian and the Pioneer. In addition he is a regular columnist for the popular news portal, Rediff and blogs on Huffington Post (India).”

Memoirs are an interesting genre in that they can take so many forms and appeal to their target reader for so many reasons. Some readers prefer memoirs by someone famous and not at all like them, whereas others like to read about a normal person who happened to have some interesting experiences. Some would prefer to read about someone a lot like themselves while other readers see the memoir as a way to better understand someone from a different country, culture, or otherwise different from the reader. For me V.Q.E. solidly fit in that last category.

The author, a relatively new doctor and native of India, wants to move to the US. He determines his best chance of accomplishing that is moving first to the UK where he’ll get more work and pass some professional testing. This approach will both provide more experience, making him more appealing to potential employers in the US, and also improve his odds of being approved by US immigration authorities. The struggle to prepare for and hopefully pass the tests is obviously one of the primary conflicts throughout the story.

Vivek’s employment, which consists of a series of short-term assignments in different parts of the UK, keeps the stress level and intensity of the story high in several different ways. His work environment, living arrangements, and job duties are constantly changing. He’s continually applying for the next temporary position, in danger of being out of work which also would mean nowhere to live since living arrangements (typically a dorm like room hid away somewhere on a hospital campus) are provided by the employer. Then we have the historical backdrop of the UK in the 80s which might provoke nostalgia for those old enough to remember things like the Falklands War and wedding bells ringing for Prince Charles and Princess Diana. Overall, I found V.G.E. to be both entertaining and enlightening in the glimpse it gave me into a different culture and way of life.