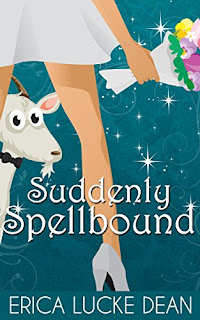 “Kindergarten-teacher-slash-sorceress Ivie McKie has officially sworn off magic. With her father back from the dead—just in time for her upcoming wedding to sexy former magician Jackson Blake—Ivie has plotted a course straight to happily-ever-after-ville. And she won’t let anything get in her way this time.

But Daddy Dearest has something sneaky up his sleeve. When “just one more spell” goes horribly wrong and detours her into the path of her father’s dangerously hot new apprentice, Ivie has to scramble to get the magic… and her love life… back on track.

Along the way, she encounters a promise made before she was born, a clan of Scottish sorcerers in kilts, and yet another goat.”

“After walking away from her career as a business banker to pursue writing full-time, Erica moved from the hustle and bustle of the big city to a small tourist town in the North Georgia Mountains where she lives in a 90-year-old haunted farmhouse with her workaholic husband, her 180lb lap dog, and at least one ghost.

When she's not busy writing or tending to her collection of crazy chickens, diabolical ducks, and a quintet of piglets hell bent on having her for dinner, she's either reading bad fan fiction or singing karaoke in the local pub. Much like the main character in her first book, To Katie With Love, Erica is a magnet for disaster, and has been known to trip on air while walking across flat surfaces.”

How she's managed to survive this long is one of life's great mysteries. Check out her other books on her website and stalk her on Facebook for fun.

“Something witchy this way comes.”

Erica Lucke Dean’s words always cast a spell on me. Her prose is easy to read and draws the reader in with believable dialogue and well set scenes. There are many twists in this story that have Ivie grasping for her sanity. The story is told through her eyes so we only know as much as she does. Her father, Angus, has secrets he has not shared with anyone. These secrets are now back to haunt not only him, but they also affect Ivie’s future and she sees no way out.

Angus has more than one secret and keeps digging his hole deeper as time passes. Suddenly, he has a new apprentice. A handsome Scottish man named Liam McDougall, who just happens to be Ivie’s age. He also seems to know more magic than Angus. The worst part is the barely controllable sexual pull Ivie feels when Liam is near. Daddy has done some dickering around and drawn Ivie into a few spells, which she had sworn off, and her hair is bright red. Jack is understandably jealous, especially when Liam shows up at every turn of events that are plaguing Ivie.

It’s a fun romp until the whole McDougall clan shows up, including Liam’s mother. It seems she and Angus knew each other as children. The IRS and the FBI both have questions for Ivie’s mother and father concerning Angus’s life insurance policy that was collected after his supposed death. There is trouble brewing all around and you must read this to see how it all turns out. There is a surprising twist at the end that leaves a few things unresolved…

Suddenly Spellbound is book 2 in The Ivie McKie Chronicles. While it could be read as a standalone, I don’t understand why you would want to.