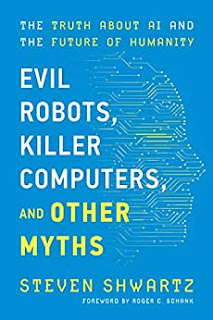 “Longtime artificial intelligence (AI) researcher and investor Steve Shwartz has grown frustrated with the fear-inducing hype around AI in popular culture and media. Yes, today’s AI systems are miracles of modern engineering, but no, humans do not have to fear robots seizing control or taking over all our jobs.

In this exploration of the fascinating and ever-changing landscape of artificial intelligence, Dr. Shwartz explains how AI works in simple terms. After reading this captivating book, you will understand

• the inner workings of today’s amazing AI technologies, including facial recognition, self-driving cars, machine translation, chatbots, deepfakes, and many others;

• the crucial areas where we will need to adopt new laws and policies in order to counter threats to our safety and personal freedoms resulting from the use of AI.

So although we don’t have to worry about evil robots rising to power and turning us into pets—and we probably never will—artificial intelligence is here to stay, and we must learn to separate fact from fiction and embrace how this amazing technology enhances our world.”

“Steve Shwartz began his AI career working with Roger Schank as a postdoctoral researcher in the Yale University Artificial Intelligence Lab. Starting in the 1980s, Steve was a founder or cofounder of several AI companies, one of which created the award-winning Esperant business intelligence product. As the AI Winter of the 1990s set in, Steve transitioned into a career as a successful serial software entrepreneur and investor and created several companies that were either acquired or had public offerings.”

Although it isn’t my typical genre, one of the books I read recently was science fiction that took place on a planet far from Earth that is run by robots. The humans on the planet were essentially a step up from slaves. I wasn’t too concerned that we were on the verge of this being a real possibility, but there are definitely things I see all the time that make me wonder what is going on. (Those advertisements that pop up on Facebook for the product you just checked out on another site are just one obvious example.) This book is excellent in that it discusses the different ways that artificial intelligence is currently being used, what is potentially on the horizon, and what is unlikely to happen anytime in the foreseeable future.

While we might not have to worry about robot overlords taking over anytime soon (our grandkids are probably even safe from them) we do have plenty to be aware of and, in some instances, even concerned. Understanding how we and our fellow Earthlings might be misled and manipulated is good knowledge to have. Knowing what to expect, if anything, from a self-driving car in the near future is also extensively covered. The author also points out areas where new laws might be called for to avoid misuse or abusive practices using some of the artificial intelligence capabilities that already exist or are likely to be developed in the near future. In spite of some of the potential downsides from artificial intelligence that we need to guard against, I finished this excited to see what the future will bring. Just like past disruptive technologies such as the automobile and computer, especially the personal computer, artificial intelligence promises to do much to change our lives for the better. We just need to have a good handle on what is and isn’t possible and put protections in place to limit the potential negatives.