Review: The Ferret by Tom Minder 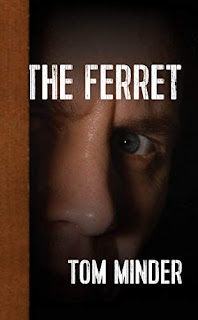 “As an LDS elder, Louie Kimble, is assigned as construction foreman in Testimony Acres, a high-end real estate development, fifty miles north of Las Vegas. He discovers it’s a money laundering scheme put together by his religious superiors. Confronted by the FBI, he agrees to provide evidence and testify in exchange for his freedom.

After surgery to fix an unfortunate resemblance to a domesticated animal, he is given a new name and history and relocated to South Jersey. He rebuilds his life, with a girlfriend, a great job, and season tickets to the local pro football team.

Then one bright Saturday morning, there is a knock on his front door. His visitor will bring back his past, and change his life forever.”

The overall plot of this book is one with plenty of appeal to a thriller reader. Young adult man gets himself sucked into a questionable, illegal situation. (That he got into this situation due to trusting his church leaders only makes his situation more sympathetic.) This bad situation culminates in our protagonist helping the FBI convict the culprits and he goes into the witness protection program, relocates, and gets his life on the right track. At least it is going great until something unexpected shakes things up. What that is and how it all works out is, of course, the last two thirds of the book and saying much more would be a spoiler, so I won’t. I’ll just say that for some (even many) people who think this sounds appealing, odds are good you’ll enjoy this book.

My personal experience was different and I suspect anyone who has had any significant exposure to Mormons (or as they now prefer to be called, members of The Church of Jesus Christ of Latter Day Saints) are going to notice things that sound wrong. For example, Louie Kimble’s situation going in is not clear. It seems to be implied that he is on some official assignment from the church, possibly a mission, when he begins working at the real estate development near Las Vegas, for example. Various terms are used that seem to imply that, but they don’t. For example, multiple times the term “Leader” is used, which is meaningless in the context it is used. Sometimes the title bishop is used or misused, seeming to be trying to imply some authority. A bishop is the leader of a specific congregation and would have no authority outside of that small circle. (One of the few, maybe only times, that the title bishop would have been the correct one, the character uses the term “Ward Leader” instead.) All of this makes those characters who are supposedly Mormon seem fake and blew my ability to suspend disbelief. Had the author made up his own religion and fake terms, I’d have bought into this. Had he gotten someone with an understanding of the Mormon culture and terminology to get things right, it would have been great. But as it stands anyone with any significant exposure to the Mormon religion or its culture including the vast majority of residents of the Mountain States in the US will find themselves cringing and mentally stumbling as they read this.

Review is based on an Advanced Readers Copy and thus I can’t gauge the final product in this area.