Review: The Magnolia That Bloomed Unseen by Ray Smith 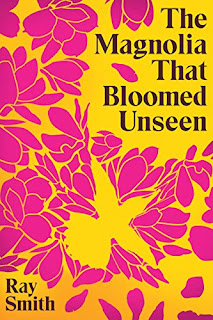 So begins the story of Molly Valle, who at forty-eight thinks she knows all that life has to offer a single, middle-aged woman—namely, men’s dismissal and disrespect. But when handsome activist John Pressman arrives in her Mississippi hometown, he challenges her self-doubt along with nearly everything else in her world. Soon, Molly discovers a strength and beauty she never knew she had—and a love so powerful, it can overcome the most tragic of consequences.

The Magnolia That Bloomed Unseen is a love story, an adventure novel, and a self-realization journey. It reignites the truth that many women—and men—have unconsciously extinguished: you are special and worthy of love, and it’s never too late to make your dreams come true.”

“Ray Smith lives in Los Angeles and is working on another book.”

The Magnolia That Blooms Unseen looks like Mr. Smith’s debut novel. However, you may be able to learn more on his website or his Facebook page.

The Magnolia That Bloomed Unseen, is a captivating story of romance, self-discovery, and strength of character.

The prologue is RC recalling how he first met Molly Valle, an activist for the Civil Rights Movement. He was a high school student who interviewed her for a class report, for which she gave him a Cliff Notes version and he received an A. Thirty years pass and out of the blue RC gets a phone call from Molly. She’s 103 years-old and is ready to tell her and John’s story in more depth,  She asks if RC would be interested in writing her story down. She had always had the faith in RC to become a novelist. At forty-four years old all he had written were short stories for literary magazines. He jumps at the chance and so the novel begins in earnest.

In 1961 Molly is a forty-eight-year-old high school English teacher who cares for and tutors her students in a small town in Mississippi. She’s divorced and lives a solitary life until she unwittingly ends up in the middle of a peaceful sit-in protest at a local diner. A young black couple enters and sit at the counter asking for a cup of coffee. Trouble ensues when John intervenes stopping a town bully from throwing a punch at Molly for standing up for the young black couple. The police arrive, arrests are made, and the incident causes Molly to lose her job.

John Pressman, at fifty years-old, was immediately attracted to Molly. His world shifted. He’d left his New York City job to join the Civil Rights Movement to make the world a better place. He’s a deep thinker and a charismatic speaker. Molly is mesmerized by him. Their journey is a romantic one on many levels. Mr. Smith is a wizard at painting the picture of an ugly time in US history against the beautiful backdrop of Mississippi. Molly and John’s story is fascinating, complex, and heart wrenching. The secondary characters are as fully-rounded and diverse as the main characters. At the end RC is left testing the boundary between what’s real, what’s imagined, and how to end his book.

I highly recommend The Magnolia That Bloomed Unseen if you enjoy human stories crafted with beautifully written prose and humility.