Review: No Way Back Today by Eric Shoars 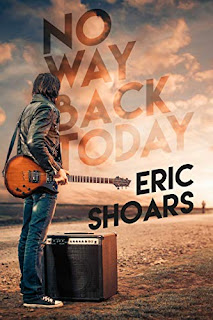 “Midlife demands some reckoning and Eric realizes he can wait no longer. As Eric hurtles headlong toward the big 5-0, he realizes there is unfinished business and is determined to find his childhood friends, convince them to form their own rock and roll band, and to go on tour! He searches out Todd, Laurel, and Lorelei so he can fulfill that dream. The story of four Midwestern grown-ups and their childhood desires to create No Way Back Today in the face of improbable odds and middle age will have you both laughing and cheering as you recognize your own unfulfilled dreams. No Way Back Today is an epic, '80s-fueled rock-and-roll escapade for a band that never was!”

“Eric Shoars is a serial storyteller who considers the English language his playground and who never met a pun he didn’t like. Eric is a modern day Walter Mitty with a serious twist. His writing style is best described as ‘fly on the wall’ putting the reader in the shoes of the lead character experiencing what he does as he does. Getting in a person's head and finding out what drives them, what makes them do what they do is tremendously fascinating. The drama we find in art often pales to the drama of real life.

Shoars' fiction works include No Way Back Today and The Sunshine Affair series.

Shoars' non-fiction works include Women Under Glass: The Secret Nature of Glass Ceilings and The Steps to Overcome Them and Evil Does Not Have The Last Word.”

Although Eric (the protagonist of this book, not to be confused with Eric the author) is a member of Gen X (the generation between the Baby Boomers and the Millennials) and I think he would say this book is especially aimed at that generation. I agree, it would resonate the most with that generation, but depending on whose definition of the specific birth years that fit in each generation some (possibly a significant number) of the Baby Boomers are going to find this book resonates with them. At least I did. Odds are if you were born in most of the ‘50s, at any point in the ‘60s or ‘70s, and even a bit into the ‘80s (the end of Gen X) this story is likely to strike a chord. Some of you kids in the Millennial generation might learn something and be amused by the old fogies and the lessons they learned in this story as well.

In spite of being fiction, No Way Back Today feels like a memoir in many ways. The inclusion of real people (Joan Jett and Ellen DeGeneres for two examples) into the story in realistic ways (at least as realistic as the rest of the story) adds to that feeling. Real places (for example the venues like the Surf Ballroom in Clear Lake, Iowa and First Avenue, the real club in Minneapolis) adds to the real feel, at least for those familiar with these places. Even though the story is fiction and humorous, the more serious lessons someone might take away from it if it were a memoir still stand. Among those lessons are that it doesn’t have to be too late to make your dreams come true and that the time to do that is probably right now.