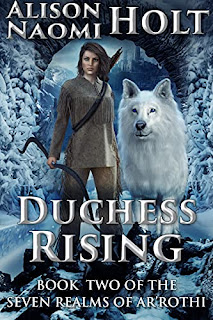 “Duchess Rising is the second book in a powerful and moving fantasy series by Alison Naomi Holt that will appeal to fans of Anne McCaffrey and Mercedes Lackey — one that blends the lyrical and mystical with pulse-pounding action.”

I would also recommend reading Spirit Child first before reading book 2. I should also mention there is a short sexy scene between Healer Becca and her lover Nashotah, a female Shona healer.