Review: Talk to a Real, Live Girl and Other Stories by Paul Clayton 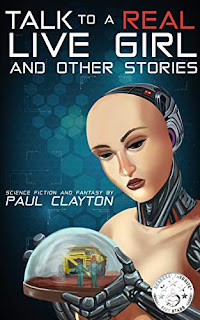 Three futuristic short stories. The first is Talk to a Real, Live Girl, the story of men, working in the mines of their robot overlords on a faraway planet. The Lawn and Happy Acres are much shorter tales of an imagined potential future.

Paul Clayton is the author of several books, from historical (a three-book series taking place during the Spanish conquest of Florida), to slightly more recent history, Carl Melcher Goes to Vietnam, based on Clayton’s Vietnam War experiences, to science fiction.

All three of the stories in this collection are entertaining and thought-provoking reads. The two shorter stories that conclude the book, The Lawn (a story of a man whose backyard has turned into a jungle, and maybe more), and Happy Acres, the story of a man who moved with his wife to a new housing development on Mars, but things aren’t working out as hoped. These both had me trying to figure out what was going on and where the story was going to go. The endings of all three leave enough wiggle room that whatever you think the answer should be, might be right. (Or maybe not.)

But the title story is the longest and the one that drew me in the most. Alex, the protagonist, has just gone through a divorce. He’s tired of a lot of the cultural and political upheaval happening in America and decides the answer is to flee earth for a while. He accepts a six-month contract with a mining company on a planet called Kratos. Things here are definitely different, for example the place is full of bots. Some of them are the bosses. Some, for those humans from earth with physical desires to be satisfied, are bots that can get physically intimate. With all the men from Earth visiting these bots keep busy. But for those who want something more, or at least something different, the men can also use some of their hard-earned money to be allowed in a room where they can talk to a girl. No, not bots, an actual real live flesh and blood girl. Alex does this once, he likes the girl, which I’m sure happens all the time. But it appears the girl really likes him too. Except that’s against all the rules. How this all shakes out makes for a fun and intense read. The world where this story took place with its differences and similarities to our current world made for some interesting things to ponder as well.

Thank you very much for reviewing my book. In this time when Big Publishing has all the power and 'Indie' authors are almost disappeared, it is appreciated very much!