Review: Curse of the Hunted by Christine Rains 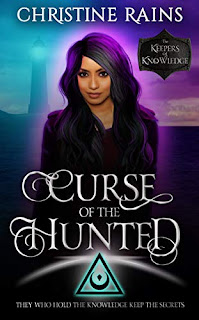 Akila's well-ordered world has fallen apart. Her delinquent brother, Cairo is the only family she has left after their mother's death. When she receives the letter from the High Council of the Supernatural to become a Keeper, she believes this could be a fresh start for both of them.

But the moment Akila presents a family heirloom to give to the Keepers as her part of her initiation, everything erupts into chaos as the cracked Egyptian statuette runs away. Corrupted by its broken aura, the rogue artifact hunts Akila in the ghost riddled seaside town.

It doesn't help when the gorgeous Chaz Nowiki keeps turning up wherever Akila goes. She doesn't want a gargoyle in shining armor to save her, even when he looks so hot in his firefighter's suspenders. Yet even with the help of a powerful guardian, things grow desperate when the relic targets Cairo as well.

Now Akila must risk everything to save her brother. But will that even be enough when she has no idea what it means to be a Keeper or a Sphynx?

‘After all, every secret needs a Keeper.’"

“Christine Rains is a writer, blogger, and geek mom. She has four degrees which help nothing with motherhood but make her a great Jeopardy player. When she's not reading or writing, she's going on adventures with her son or watching cheesy movies on Syfy Channel. She's a member of S.C.I.F.I. and Untethered Realms. She has four novels and several novellas and short stories published.”

Akila Levesque and her twelve-year-old brother, Cairo, move to Pyreshore, New Hampshire after the death of their mother to start a new life after having been invited by the High Council of the Supernatural to become a Keeper of Knowledge. Now Akila needs to learn how to adapt to a small-town life where everyone knows your business after living in a big city where one can live in anonymity. One of Akila’s talents is she can see ghosts. They are given a house to live in which has a ghost in the front yard to greet them. Akila calls him Captain and he is always there. It is clear Captain wants something of her but she can’t hear him, therefore she keeps putting Captain off because of the other chaos going on in her life.

One of the conditions Akila is given to become an apprentice keeper is to bring an undocumented artifact to donate to the council to be put into their archives. She does this, however her mentor, Seth, wants to see the small sarcophagus that contains an ushabti. An ushabti is a statuette carved in the likeness of a person who served a pharaoh, and this one is magic. Seth’s curiosity wins out so he opens the sarcophagus to see the six-inch ushabti. He is able to grab some photos of it before it disappears. So now the hunt begins and Akila and Cairo are plagued with strange potentially deadly events where the ushabti turns up.

It took me a while to warm up to Akila, she is rigid, unforgiving, and rude. Chaz is nothing but helpful to her and she can’t stand feeling like he is rescuing her from small inconveniences she could handle given time. It’s the small-town neighbors helping neighbors she can’t understand or accept. However, this handsome hunk of man also shows up just in time to literally save her life time and again. The storyline is original, unique, and enthralling. The characters are well rounded, intelligent, diverse, and captivating. The tension ebbed and flowed from terror to sexual tension. There were times I was sure I could see what was coming, but then the plot veered another direction. I had Captain pegged, but the way it all came about blew me away. I was pleased to see Akila finally settling into her role in the township of Pyreshore. I can easily see The Keepers of Knowledge turning into an epic series.

Curse of the Hunted by Christine Rains is book 8 in The Keepers of Knowledge Series, and can be read as a standalone. 10 books, 10 authors, 10 Keepers, 1 shared world.

A few proofing misses, mainly missing words, but nothing that threw me out of the story.