Review: Who Let the Demon Out? by Naomi Bellina 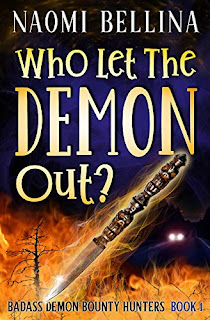 “Not only is her suicide attempt thwarted by a stranger, but when she comes back from the dead, Sable is tasked by Lucifer to find and return to hell a demon she let loose. If she doesn't, she'll be sent to the darkest level of the afterlife when she dies.

The woman Jack pulled from a running car is obviously disturbed and her story about Lucifer and demons is bullshit. But she has the name of a dead man written on her arm and Jack wants to know why.

Since it's Jack's fault she's in this mess and his skills from a background in the security business are useful, Sable recruits him for her find-the-demon mission, which turns out to be all kinds of difficult. Not only can demons inhabit human bodies, they have other nasty tricks up their sleeves, like incinerating objects and people who get in their way.

It also turns out the inhabitants of hell lie and that things on Earth are not what they appear. Nor are things in her own world, Sable discovers, as she battles to complete her mission before time runs out and it's impossible to send the demon back.”

“Naomi Bellina lives in sunny Florida with the love of her life and the world's chattiest cat. She became a romance author because her characters insist on falling madly in love. So she lets them. She writes romantic suspense, light science fiction, and paranormal romance. Her interests include dancing, motorcycle riding, drumming and creating healthy meals. Her motto: Never pass up the opportunity to have an adventure!”

Sable, riddled with guilt from a dark secret in her past, decides the world would be a better place without her. Jack, a tow-truck driver, sees a car running in an abandoned parking lot off the beaten path and pulls her out of her car. He is able to resuscitate her. As her life force returns to her body a demon catches a ride on Sable’s tailwind right back to earth, and he has an agenda.

When Indignus (Iggy), a dark angel, appears to Sable he tasks her to send the demon back to hell where he belongs. The trouble is demons and dark angels lie. I think Iggy just wanted to go back to the bar for a few more drinks, so he told Sable it was her responsibility to send the demon back. It also turns out that demons have a few tricks up their sleeves that are quite deadly. Since Sable figures she wouldn’t be in this mess if Jack hadn’t brought her back from the dead she recruits him to help her complete her mission. Jack is a good man and has some handy skills he is able to utilize in the demon hunting mission which I found a bit too convenient. Sable is smart, has a good heart, but is a little slow on the uptake.

After a wordy, bumpy start Ms. Bellina settles into a nice pace, aside from a few spots I would have liked more detailed information about, which would have added more depth to the story. Sable and Jack’s characters did show growth at the end, but I didn’t consider either of them badass. Perhaps the demons are the badasses, because the one in this book was. However, that is not the way I read the series title: Badass Demon Bounty Hunters.

If you are looking for a darkly humorous Urban Fantasy with a unique storyline and diverse characters you may enjoy Who Let the Demon Out?.

*** TRIGGER WARNING *** This book begins with a failed suicide attempt. Also be prepared for adult language and several F-bombs.

Who Let the Demon Out? Is book 1 in Naomi Bellina’s, Badass Demon Bounty Hunters series.