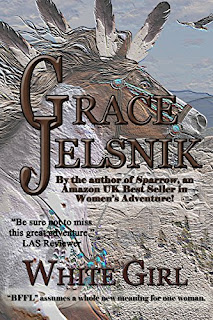 “When her lifelong best friend, Maggie, entrusts a USB drive into Tashina’s care, she tells the rookie FBI agent to give it to an unknown David if anything happens to her. He’ll find her, Maggie assures her. Hours later, Maggie is dead, and Tashina’s family and friends are under surveillance. She has nowhere to run but to the home of her mother’s people, the Lakota Sioux on Pine Ridge Reservation. In her journey from California to South Dakota and back again, the half-Lakota Tashina learns not only what is on the USB drive but also what it means to be half-Indian and half-white in a world where both sides still nurse old grievances. A mission to honor a friend’s request becomes a period of discovery for the woman disparagingly called ‘white-girl.’”

“Grace Jelsnik lives in North Dakota with her husband of fifteen years, their three children, two dogs, and three cats. Her romances emphasize the give-and-take emotional interaction between two characters, addressing the sparks that lead to heat, not the heat itself. She takes pride in writing clean romances for both young and old readers, novels her daughter can one day read without embarrassment, and enjoys inserting comic elements into both plot and dialogue.”

To see more books by Ms. Jelsnik you can visit her Amazon Author page or Goodreads.

I like to read stories that include Native American elements, more often than not mysticism is brought into play. That is not what you will find in this novel though. What you will get is a solid view of Sioux culture and history. Tashina’s parents recognized her warrior spirit at a young age and sent her to spend summers with her grandfather on the Pine Ridge Reservation so she could have a solid foundation in her Native American heritage. However, her cousins never let her forget they considered her a white girl because she wasn’t a full-blood Sioux. The story is told through Tashina’s point-of-view so we are given insight into her inner thoughts as she works through her inner dilemmas; justifying her FBI identity, her somewhat privileged white upbringing, and her Sioux heritage. I found these story arcs particularly engaging and fascinating.

Ms. Jelsnik has woven Tashina’s journey with a powerful story arc about a homeland terror plot that could have a global impact. This includes corporate espionage on the highest level as well as potential corruption in other federal agencies. Tashina’s only ally is a man named David she had never met. David is an unusual, interesting character. He was raised by a man who was not his father and who instilled discipline and loyalty to mold him into an ideal agent. Tashina has her suspicions as to which agency, she has good instincts that serve her well throughout the story. David was secretive and detached; he also had good instincts as well as survival training. He was quick to observe that Tashina was trapped between two cultures, being an Indian at heart but white in practice. Their relationship was guarded and felt realistic. Their dialogue was comical at times as they played off each other like an old married couple.

I don’t usually read political intrigue type novels full of espionage, but this one seemed well researched, plausible, and frightening. I wouldn’t call White Girl a relaxing read, but I did enjoy it and wouldn’t hesitate to recommend it if this is a genre you enjoy.