Review: The Cougar Candidate by Will Worsley 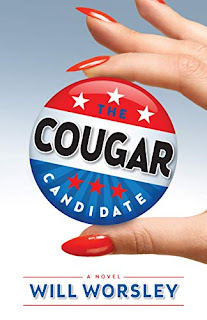 “Five years after her humiliating re-election defeat, California's ex-governor Pitypander is still sulking in her seaside mansion, bingeing on romance novels, and ogling her pool boy, when she is hastily drafted to run for president.

Making a comeback won't be easy. Patty must overcome her husband's resistance, her rival's smear tactics, a Russian plot to wreck her campaign, and the most dangerous foe of all: her special fondness for young men.

When Jack Snap, a naive 22-year-old reporter, investigates a sex scandal in Patty's past, he unintentionally ignites her desire. The closer he gets to unearthing her misdeeds, the more recklessly infatuated she becomes. But if Patty doesn't stop Jack's search soon, her quest for the White House will end in disaster.

Can the befuddled politician get a grip on her midlife fantasies and foil the young reporter before he destroys her? Find out in this lighthearted satire about a candidate torn by conflicting urges, grasping for both power and passion--as her nation's future hangs in the balance.”

A full-time writer of fiction since 2016, Will Worsley had taken his two masters degrees in business and English and put them to work, working for a period as an editor for Time-Life books and another stint as a money manager. Both would have come into play in writing his first book, Investing in Vain, which was satirical fiction just like his latest work that will be discussed here.

Satire has a purpose, going over the top in the depiction of something as a way to show how close reality is coming to ridiculousness. As The Onion and other sources of political satire have found out recently, reality can sometime reach the point where it is tough to tell that something is satire and not real.

This book hits that fine line, going a touch over the top, but not so much that it feels like it couldn’t potentially be reality. We’ve seen plenty of male politicians going too far with females they interact or work with. That the premise of this book has a female as the candidate who is going too far, turning the cliché on its head, makes it that much better. I also liked that regardless of your political stances your reaction to Patty, the title character, isn’t likely to be much different. You’ll also find that neither candidate, Patty or her opponent, is likely to feel like a good choice.

Like all good satire this will get you thinking about real life, how out of touch many political leaders seem to be, and how we the people view them. I pondered on ways that the system works and ways that it doesn’t. Or you can ignore the serious subtext and just laugh. (Guaranteed to laugh, regardless.)

Certainly some adult subjects are mentioned or alluded to in subtle ways, but things don’t get too explicit.