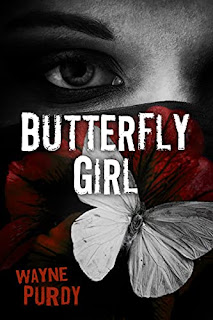 “A decade ago, Hector Collins was investigating the murder of a cross-dressing soldier while stationed in Afghanistan. The investigation cost him his career, an eye and his honour. The case was never solved.

Now, Heck has slipped into an easy life as a bouncer at a strip club, Pandora’s Box Gentleman’s Club. It’s a comfortable life, a life without responsibilities, danger, or commitments. That simple life is challenged when a trans girl is murdered and Heck lends his expertise to the investigation.

Together with Hazel, a tattooed stripper with her own criminal past, they attempt to unravel the true identity of the killer. Can they stop him before he kills again or will they be his next victims?”

By day, Wayne Purdy works as a transit operator in Pembroke, Ontario. But in his off hours he’s what he calls an aspiring writer. This is his second published novel.

The two main characters in this story, Hector, called Heck for short, and Hazel have interesting pasts and in a lot of ways their current life doesn’t seem to fit what you’d expect from them based on their skills, experience, and smarts. But as you get to know them better, you also come to an understanding of the factors that led to their current situations. Heck is ex-military police, but about ten years ago found himself ousted from this career in the middle of a murder case. He’s now a bouncer at a strip club. Hazel is an intelligent single mother with a troubled past that has been holding her back, but is managing to survive working as a stripper at the same place as Heck. These characters and their life stories that slowly come out as they get to know each other and work on solving the mystery at the heart of this book adds a lot to the story.

That case that Heck was working when he got tossed from the military ten years ago also figures into the mystery today, causing a police detective in his current hometown who was one of his former peers in the military police to come to him when he recognizes a current case has a lot in common with that prior case. Heck can’t resist, jumping at the chance to dig into this now and over time involves Hazel in his investigation. I won’t say anything too specific about the mystery other than if the current murder was done by the same person who did the first, as seems almost surely the situation from the beginning, then the list of suspects gets whittled down to a fairly small number quickly, but figuring out which of the possible suspects did the crime (not to mention getting evidence), or if the base assumption that both were done by the same person is true, makes for lots of interesting investigation and problem solving as Heck and Hazel look for and fit together all the pieces of the puzzle.

The author is from Canada and uses Canadian spelling conventions.

This is the first of what looks to be a planned series featuring Heck Collins.

A small number of typos and other proofing misses.

We pioneer in providing research and analytical tutorial assistance to all doctoral candidates. Our highly qualified research team will assist you all throughout your thesis.