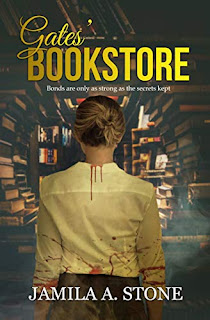 When Diane Gates’s father died, she opened a bookstore in his honor and left her criminology career behind. Her passion for literature earned Diane quick success, and Gates’ Bookstore fast became a popular stop for locals and visitors alike.

Arriving at work one day, Diane discovers a minor break-in has happened overnight. She believes it to be a petty, one-off occurrence, but days later it happens again.

And this time, there’s a body.

The circumstances are unmistakable: a young woman has been murdered, and suddenly the future of Diane’s bookstore hangs in the balance.

Joining forces with detective Eric Barnes, Diane can’t resist her forensics-filled past and decides to investigate the murder alongside him. What she couldn’t have predicted however, is that the more evidence they uncover, the more it all points to Diane herself.

As a damning case starts to back Diane into a corner, her partnership with Eric is put to the ultimate test as they race to piece together the clues.

Can Diane unravel this mystery before she lands behind bars?

Or will she just become another pawn in a serial-killer’s game?

The first book in the gripping Diane Gates series.”

"Jamila A Stone lives in Washington, D.C with her two dogs. Jamila is driven to tell stories without censorship and for the continued creativity in the world of literature. As an African American woman, she understands the lack of opportunity persons of color have to let their artistic creativity be seen on equal platforms, so she created her own publishing company called Black Glory Publishing House. She thinks not just of herself but of the current and future of literature namely increasing the diversity and inclusion within the literary community."

To begin at the end, because it is not written in the book description, there is a huge cliffhanger.

Diane Gate is called back to her criminology expertise to unofficially investigate the murder that happened in her bookstore. The clues and leads found all point straight at Diane, and she can’t explain why or how. The case begins snowballing into a massive web of murder, conspiracy, lies, and hate.

If you enjoy a detailed, twisted, murder mystery with well-developed characters this may be the story you’ve been searching for. Check it out.

Gates’ Bookstore is book 1 in Jamila Stone’s, Diane Gates series. A few F-Bombs were dropped and the murders are graphic.

A small amount of missing, wrong, or extra words. My larger concern was the amount of repetition.