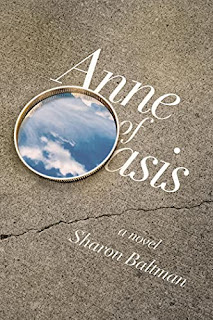 “An eccentric seventy-year-old is obsessed with changing her life — or ending it. She bumbles through mysterious rituals with a talk-therapist, explodes secrets, re-jigs behaviours and embraces bliss in the arms of a woman who was right in front of her for fifty years.”

Author Sharon Baltman is a retired psychotherapist who lives in Toronto, Ontario when she’s not in her preferred place, hanging out on the beach in Mexico. She’s written lots of shorter works ranging from articles for the Globe and Mail, Toronto’s newspaper, to contributing to literary anthologies. Her first longer work was a memoir called Escape from the Bedside. This is her first novel.

Although woman’s fiction, I found that the story here hit closer to home for me, a no-longer-very-young guy, more than I would have anticipated. The story revolves around Anne, a seventy-year-old woman who goes to a therapist for help in figuring out her life, both where she’s been and, more importantly, where she wants to go from here. I could see potentially anyone, at least any adult, enjoying this story and having it trigger thoughts about their own lives. I found that my age (a bit younger than Anne, but close enough) meant I could relate to a lot of the specific thoughts, feelings, and struggles she was going through, which added a lot to the story. I imagine most people would find some things that struck a chord with them in Anne’s life while other things wouldn’t fit (I luckily have a better relationship than Anne does with her kids, for example). One unique aspect of this story is how much of it is the reader figuratively sitting in Anne’s head, more involved in understanding and following her thoughts than on what’s happening in the world around her, the biggest exception being what her therapist has to say to her. But her story and her struggle to get to a better place kept me engaged throughout.