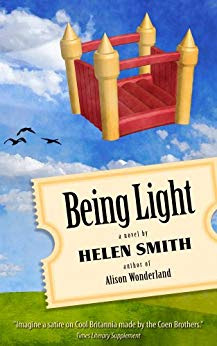 “When Roy Travers doesn’t come home his wife begins to suspect he has been abducted by aliens, and she enlists the help of a private detective to find him. But Roy was not taken by aliens. The truth is far stranger.”

Recipient of an Arts Council of England Award, Helen Smith is another author who started out traditionally published and is now choosing to release her books as an indie. She’s written novels, children’s books, poetry, and plays. In the works are a play she was commissioned to write and a pilot for a TV series in development. In addition to this book, Smith has four additional books available for your Kindle, including Alison Wonderland, which was picked up by Amazon’s Encore imprint.

For more, or to learn what Smith is up to right now, visit her website.

It is unlikely Being Light is anything like any book you’ve read before. There are multiple casts of characters, which in the beginning seem unrelated. Keeping track of them all is a challenge at first. One thing they all have in common is they’re … I want to say crazy. Maybe not in the sense that they’re certifiable, although we do have some belief in alien abduction, so I won’t rule it out. But each has plenty of quirks and eccentricities. Although not a sequel in the normal sense, Alison Wonderland (from the book of the same name) and her boss, Ella Fitzgerald (how did that name slip past me when I read Alison?), each reprise their roles.

I’ve read all of Smith’s books that are available for the Kindle. Each time the same things stand out for me. The plots are original, inventive, and (quick, find another word for quirky) idiosyncratic. But it is the characters and the humor that draw me in, not just in their situations, but also in how Smith describes them. For example, when I read, ‘We don’t have a leader, here,’ says the leader of the group…,” I did a double take and laughed. When Smith explains the reason for the conditions inside service station lady’s restrooms, I flashed on several stories from women complaining about the same, and couldn’t help but chuckle. I was amused by one character’s concept of heaven as being “exotic and unfamiliar, the sort of place that is unattainable for ordinary people, like Richard Branson’s island in the Caribbean.” These subtle humorous moments accumulate into a fun, enjoyable read.

Added for Reprise Review:  Being Light by Helen Smith was a nominee in the Literary Fiction category for B&P 2013 Readers' Choice Awards. Original review ran April 19, 2012