Review: The Final Life of Nathaniel Moon by Shawn Inmon 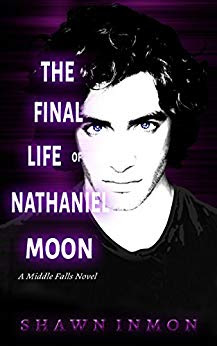 “Nathaniel Moon is the reluctant messiah.

He has powers that define the word miraculous. But when he used those powers to help others, he brought about a world of trouble.

Now Nathaniel lives a life of quiet obscurity, performing anonymous miracles. But, his anonymity has to end, because evil is coming to Middle Falls, Oregon, and threatens the people Nathaniel loves most.

It's going to take a reluctant messiah to put things right.”

Married to his high school sweetheart, Dawn (a romance chronicled from both Shawn and Dawn’s point of view in Inmon’s first two books), Shawn Inmon lives in southwestern Washington where he writes fulltime, or at least as fulltime as he can without interfering too much with grandkid and pet obligations. You can follow him on Facebook.

I’ve read a few of the books in this series and thus far they all had the same basic premise. The lead character dies, then comes back to life at some point in their past, but with memories of their past life or in some instances lives as they can die multiple times and return multiple times. In all cases, the new lives are all restarts from the same point in their past. Probably needless to say, this basic premise has an almost endless potential for unique characters and possibilities for how they use their new lives. Some try to get things right that they didn’t get right the first time (or first three or four or five times). Others try to prevent something bad from happening to someone else the next time around. Given the number of successful romance books published that are built around one basic story, I’m confident Inmon could have done many more time travel stories without messing with his formula here. But he has.

This time around we have a character (actually we have two) who fit the basic premise, but the main character is different. Yes, he appears to be living another life (his last one according to the title) but there are some differences in him that make a big difference in the story, where it can go, and where it does go. The places it sends the reader’s thoughts are also a lot different than the prior stories, no longer wondering what you might do differently if you could “do it all over again” but also wondering about the concepts of good and selflessness as well as the difficulty of balancing your personal needs with those of others. Shawn Inmon’s books, especially those in this series, have a way of prompting thought which to me is one of the main reasons I read, to see and consider things from different points of view. If you feel the same, this book should hit the spot.

Part of the Middle Falls Time Travel series. These books largely take place in the same fictional Washington town and may sometimes have characters that show up from other books, but all of them also stand alone.