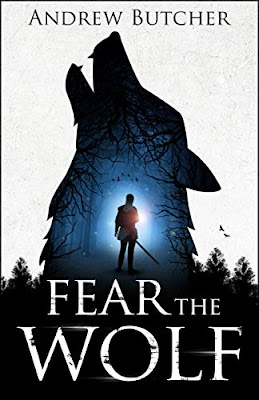 Amazon’s blurb says, “Fear the Wolf is an adult fantasy thriller set in a mysterious world that was torn apart by a great cataclysm. Follow Senla on her treacherous journey as she overcomes her greatest fears and learns to accept herself in a world that’s always trying to tell her who and what she should be.”

There is rather little about Butcher on the web. This appears to be his first book. I was only able to find this about him: “Andrew Butcher hopes that through following the main character on her journey, readers will learn to accept themselves more fully and to find their own sense of inherent worthiness. Throughout the novel, [he] explores some of the most basic human fears and insecurities, including the feeling of not belonging--of never being good enough.” The dedication at the front of the book is ‘for heroes of every kind’.

There is a prologue in which people we have not yet been introduced to chase an enormous white wolf. This is doubtless to get a bit of action in early. The book proper is quite slow to get going. It paints its early pictures in muted colours – the colours of the village. We learn that the village lives in fear of anyone who ‘presumes too much’ and brings the wrath of the wolf down on the whole community. The ideal is to be unexceptional. Outside the village are nomads who roam and trade. They are sometimes free spirits, sometimes wild and violent. Nobody is well educated.

There is an element of stereotyping, one might think, in the diametrically opposed communities – the villagers living on the edge of the wildwood, the nomads within and criss-crossing it. Dangerous animals live in the forest: night-apes, foxes, wolflings, and the great white wolf. There is also a sickness for which there is no cure. All this goes to encourage the villagers to stay quietly in their own place.

You might think that this sounds like a novel of stereotypes. And in a way you’d be right. But this is a novel which only came out in April of 2019 and it has the zeitgeist firmly in its teeth – the polarisation of communities in both the US and here in the UK (Brexit! Aaargh!), the diminution of personal liberty in a search for greater security, the loss of excellence in a quest for conformity, suspicion and fear of ‘the other’ – the incomer who is not ‘us’. It wears its political allegories lightly but they are definitely there in Butcher's examination of “the most basic human fears and insecurities”.

The main protagonist is Senla. She has been rebelling against her dreary life since she was a small child. She is the grief of her mother who is always sharp with her. Senla’s mother is a deeply unhappy woman who, along with the rest of the village finds Senla ‘presumes too much’. However, Senla, we learn, is an exceptional person, forged in adversity. How will the village deal with her? How does that Prologue fit into what is to come?

There were two minor frustrations for this reader. The first was a mention in the blurb of this novel being set in “a mysterious world that was torn apart by a great cataclysm”. This cataclysm is occasionally mentioned. But no reason for it, or result from it is ever offered. Checkov reckoned that (in fiction) if a gun was seen to be hanging over the fireplace in the first act of the story, then it needed to be fired in the third. The ‘cataclysm’ gun is still hanging over the fireplace, and the story is finished.

The second frustration was that every time Senla exerted herself we were given a litany of every scratch, wound, sore, and ache – all of which would promptly be forgotten next time she needed to run or fight. The listings often started during action sequences, slowing them down. I learned to skip past them: you may wish to do the same.

However, this is an interesting book which has much to say about the times we are living in as well as telling an exciting story which gathers pace as it unfolds.

And, finally, I must mention that one of the threads of this book hangs on a comma! Yes, that itsy bitsy grammatical mark. I can’t say more because of spoilers – but I hope you enjoy that powerful little comma as much as I did when you come to it.